To make matters worse, the declines are back in the double digits (2017 quarters only saw single-digit declines). The estimates come from IDC, which counts both slate form factors and detachables, meaning tablets with keyboards included. Apple maintained its top spot for the quarter, with Samsung and Huawei rounding out the top three. The top five vendors accounted for 65.6 percent of the market, up from 61.2 percent last year: 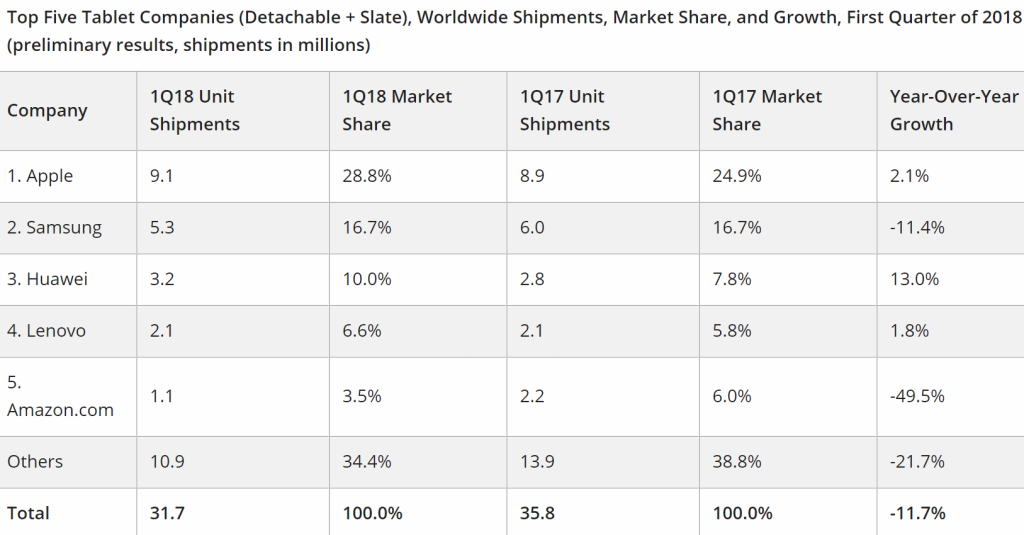 Apple’s shipment numbers were up by only 200,000, but that still translates into a 3.9 percentage point gain (from 24.9 percent to 28.8 percent), as the overall tablet market declined so much. The company was able to maintain its lead thanks to its lower-priced iPad and refreshed iPad Pro. The big question is how this year’s iPad will perform.

Samsung shipped 700,000 fewer tablets than in the quarter a year ago and ended up staying flat in terms of market share (16.7 percent). The company is one of the few remaining brands to offer premium Android tablets with its Tab S lineup, but given the move to detachables, it’s not clear this will last.

Huawei shipped 400,000 more tablets, gaining 2.2 points (from 7.8 percent to 10 percent), solidifying its third-place position. Lenovo gained 0.8 points with the same number of shipments, while Amazon dropped like a rock (in the holiday quarter, the company managed to snag second place).

None of this is a big change from 2017 and previous years. The replacement cycle for tablets is still closer to that of traditional PCs than smartphones, and detachable tablets is the only category seeing growth. Everyone is now trying to gauge the impact Chrome OS might have on the declining market.

“Chrome OS’ entrance in the detachable market is a welcome change as Google is finally a serious contender from a platform perspective,” IDC research analyst Jitesh Ubrani said in a statement. “Google’s tighter control and integration of Chrome OS will allow brands to focus more on hardware design and additional services rather than spending resources reconfiguring Android to work in a detachable setting. Combined with Microsoft’s efforts to run Windows on ARM, the detachable market is poised for strong growth in the near term.”