Fresh off the heels of yesterday’s report that Samsung plans to release a foldable version of its Galaxy smartphone codenamed “Winner,” a recently published Samsung patent appears to show the device. Unfortunately, it looks and sounds like a sure-fire loser.

As the Wall Street Journal reported yesterday, the foldable phone’s key characteristics are a 7-inch screen and a chassis that folds down to the size of a wallet. “When the phone is folded,” said the Journal, “its exterior shows a small display bar on one side and cameras on the other.”

Dutch site Letsgodigital discovered a July 2018 international patent for a nearly identical Samsung device, which was filed by Samsung in 2016 and initially approved in 2017. The patent for a “Foldable Smartphone with Hidden Display” depicts a device that looks like a current-generation phone from the front, but bends at the center like a wallet. Its “Hidden Display” sits at the edge of either the top or bottom of the closed device, enabling users to access some features while the phone is folded.

Samsung apparently believes that this design will enable it to offer a 7-inch screen in a pocketable form factor — a size larger than 2017-vintage Pixel XL and Plus-sized iPhone screens. Unfolded, the surface area would indeed be closer to a tablet than a phone.

But display improvements are enabling new phones to offer nearly 7-inch screens without requiring folding. By September, Apple is expected to include a 6.5-inch screen in the iPhone X’s larger-sized sequel, which will use bezel reductions to squeeze that larger display into a chassis sized like the iPhone 8 Plus. 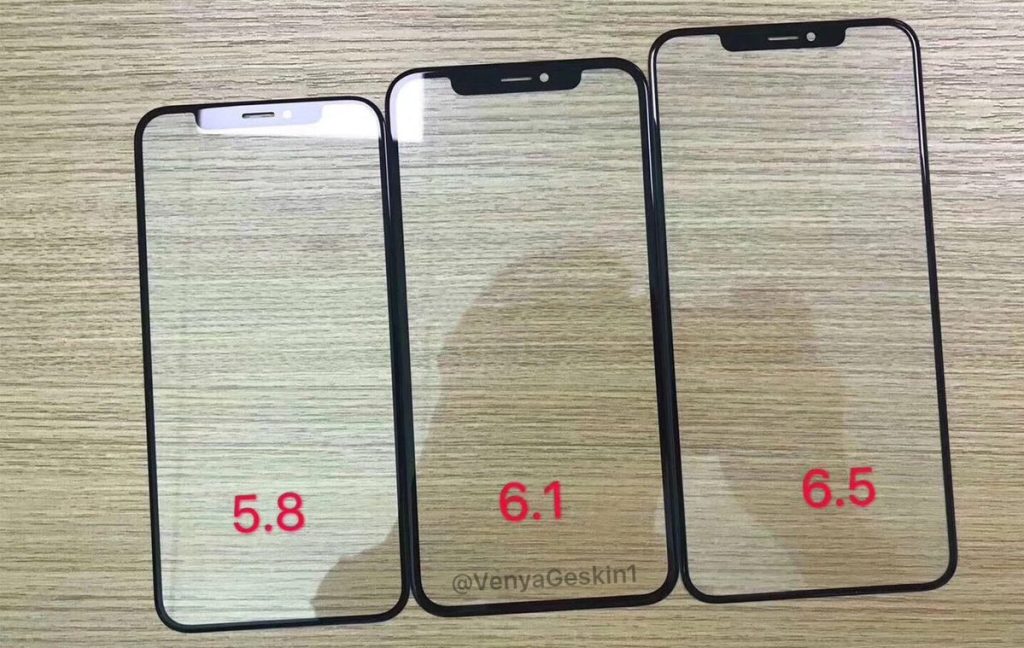 Above: The Plus version of the iPhone X is expected to have roughly the same dimensions of the iPhone 8 Plus, but with an inch-larger screen.

Two of the critical differences between Samsung’s and Apple’s approaches are pricing and power efficiency. While the new iPhone Plus model will likely start at or below $1,100, the WSJ report says that Samsung’s price tag “could easily surpass $1,500.” Moreover, the use of interior and exterior screens — the former larger than before — is raising concerns within Samsung regarding overheating and the need for more powerful components, including a graphics processor and larger battery.

Those concerns assume that Samsung gets the folding chassis right. What appears as a nice soft housing curve in a patent drawing could easily wind up like Microsoft’s Surface Book, with a thick flexing hinge that could scratch whatever else is in your pocket. 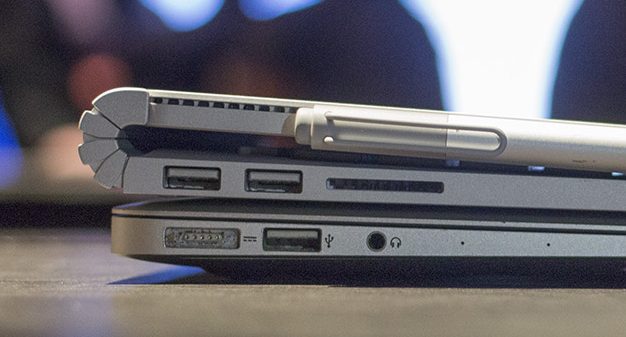 Above: Microsoft’s folding Surface Book on top of a standard MacBook Air.

All of this adds up to a huge question: “Why bother?” According to the report, Samsung is driven by the desire to be first to offer a foldable-screen phone, which it hopes will boost stagnant sales. A sense of momentum probably also accounts for its desire to move forward: It’s been working on a folding phone since at least 2015 under the codename Project Valley. Back then, the idea was to squeeze a small tablet into a chassis sized like a pocket-sized book. The company has since juggled concepts around, seemingly stumbling on basic usability issues.

Foldable computers have been science fiction fodder since well before the technologies existed to create them, as ultra-thin, portable screens have long been imagined as magazine and newspaper replacements. Pursuing the concept for either a phone or wearable, Apple reportedly worked with Corning years ago to create a curved, flexible glass that was released as Willow Glass. But Apple didn’t wind up using the material in a device.

That’s probably because the existence of flexible glass and folding screens doesn’t necessarily justify the release of a product. A big phone or mini-tablet that folds down into a wallet form factor is trading one issue — reduced phone pocketability — for several others. Until someone gets the overall design right, a folding phone or folding tablet won’t be worth buying even at today’s prices, to say nothing of a premium.