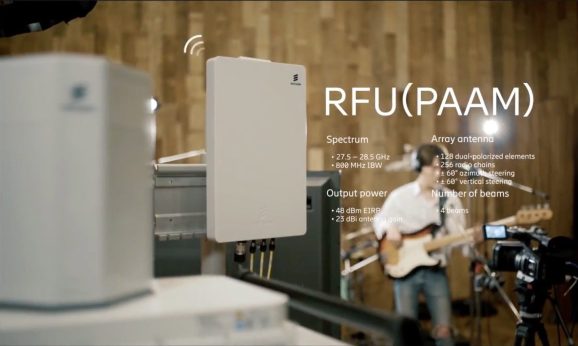 Ericsson 5G networking hardware is shown in a test earlier this year.

As Verizon prepares to turn on its next-generation 5G network in the United States, it’s upgrading existing 4G cell towers with “LTE Advanced” networking gear that’s only a switch-flip away from offering 5G service. Ericsson announced today that it will be supplying 5G-ready network hardware for new Verizon markets, delivering faster speeds for 4G users ahead of the late 2018-early 2019 5G transition.

The new hardware will enable Verizon to improve the energy and spectrum efficiency of existing 4G towers, boosting network capacity for existing customers. For now, the difference will be faster file uploading and downloading speeds with improved app responsiveness, plus support for “massive” deployments of internet of things devices. Verizon will be able to turn on 5G support with a software upgrade.

Today’s deal is noteworthy both for the performance improvements users can expect, and for what it says about 5G hardware providers. Ericsson and Verizon have spent more than a year collaboratively testing “4.5G” bridge technologies that send denser, higher-bandwidth data to 4G phones, enabling LTE Advanced devices to hit up to 1 gigabit per second speeds. Towers upgraded with the latest Ericsson hardware can begin offering superior performance to recent 4G devices now, then jump two to four times in bandwidth — with radically reduced latency — as soon as Verizon turns on 5G in a given market.

Verizon’s decision to increase its commitment to Ericsson networking gear comes after the carrier made testing and hardware deals with other suppliers, which notably all appear to be non-exclusive. It has committed to using some Samsung 5G gear for its “fixed 5G” home broadband offerings, run tests with Nokia, and at one point appeared to be considering using Huawei products as well.