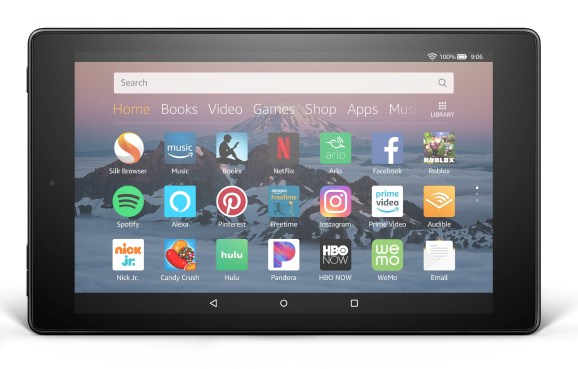 Amazon today announced an upgraded Fire HD 8 tablet, with Alexa hands-free mode built into the fabric of the device.

While Alexa has been available on Fire HD tablets for some time, it wasn’t until the all-new Fire HD 10 launched last year that you could beckon Alexa purely by voice, similar to how its Echo smart speakers work. Back in April, Amazon announced it was bringing Alexa hands-free mode to its smaller Fire 7 and Fire HD 8 tablets via an over-the-air (OTA) software update, but there was a catch — the screen would have to be “awake” at the time of your voice command, or if the screen was asleep it would have to be plugged into an electrical outlet.

With the latest Fire HD 8 tablet, however, Amazon has remedied the situation by bringing the same full hands-free functionality of the Fire HD 10 to the mix. This effectively positions the Fire HD 8 as a more affordable version of the Echo Show, Amazon’s first “screened” Echo device that launched last year. The Echo Show normally costs $230 — though it’s currently available at a $100 discount — while the Fire HD 8 costs just $80.

A few months back, Amazon also announced show mode for the Fire HD 8 and Fire HD 10, bringing a full-screen display to the tablets and allowing Alexa to serve up visual responses in addition to the usual audio answers. Show Mode on the Fire HD 8 via the software update also required the device to be connected to power, but on the new version of the device that is no longer the case.

It’s worth noting here that while Alexa hands-free Fire tablets may mimic much of the functionality of the Echo Show, the experience won’t be quite as good — the microphone and speaker capabilities aren’t up to the standard of their Echo-branded brethren. But today’s upgrade is one more way for Amazon to showcase Alexa’s talents to Fire tablet owners who maybe haven’t bought into the virtual assistant ethos yet.

The new Fire HD 8 tablet comes with a few additional hardware upgrades, including a 2-megapixel front-facing camera and 720-pixel video support. The previous version only offered a VGA front-shooter with no video support. It also now supports 400GB additional storage via the microSD slot, up from 256GB on its predecessor.

The Fire HD 8 is available in four colors — black, blue, red, and yellow — and can be preordered today starting at $80 for the lowest configuration. The device won’t ship until October 4.

In related news, Amazon also announced an updated Fire HD 8 Kids Edition, which also now features up to 400GB of additional storage and a fresh design for FreeTime, Amazon’s subscription service that offers special “whitelisted” selections of apps, books, games, websites, videos, and more, as well as a parental dashboard and controls for parents who like to micromanage their kids’ device usage. The interface now displays dedicated rows for content type to make it easier for kids to find titles.

The new Fire HD 8 Kids Edition can also be preordered today for $130 and will include a year’s subscription to Amazon FreeTime. It will start shipping from October 4.