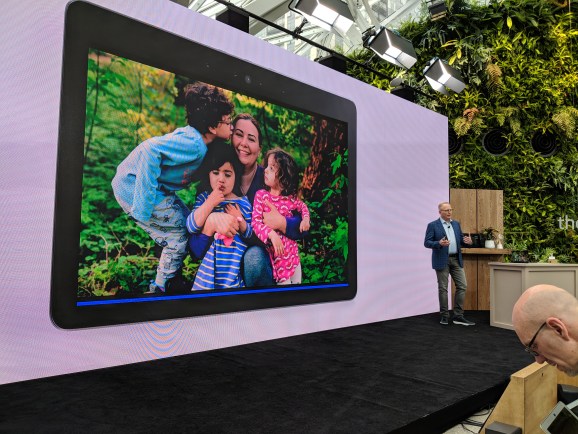 Amazon debuted nearly a dozen new Alexa-powered devices in a head-spinning hour atop The Spheres in Seattle today, including a second-generation version of the Echo Show.

Two major upgrades to the latest version of the Echo Show were absolutely necessary, based on my experience with the first-generation Show introduced last summer: Improvements to video playback and better video calls.

Today, video calls on Echo Show are limited to Drop In, a solution inside the Alexa app. Amazon has not released any statistics about the use of Drop In, which may indicate that adoption rates aren’t spectacular or worthy of a milestone announcement.

Personally, I’ve never made a Drop In call, not because it’s ineffective or shoddy, but because I literally know nobody else I could call.

That made it impossible to play out the enticing scenario Amazon introduced in a commercial for Echo Show and Echo Dot: Want to call grandma? Just say “Drop In on grandma” and you’re there. Problem with that is it’s more than likely you have to buy grandma an Echo Show or Echo Spot to do that.

Like tweet and Google, Skype has become a verb in the popular vernacular. Adding support for an app with hundreds of millions of users, that happens to be one of the oldest and best-known ways to make video calls, is an awful lot better than starting from zero. Skype will also extend calls with the Echo Show to Xbox game consoles, smartphones, and personal computers.

Microsoft reported last year that its app has been downloaded more than a billion times and has 300 million monthly active users. To be clear, Microsoft has described its user base at that number for a long time, signaling that the size of Skype’s user base may have stagnated, but that’s still better than a video chat service not used by your friends or family.

The introduction of Skype for the Echo Show and other visual surfaces with Alexa continues a partnership with Microsoft and Amazon. Cortana for Echo speakers and Alexa on Windows 10 PCs was first introduced last month.

Amazon’s choice to bring Skype to the Echo Show could also be driven by a pragmatic reality that other smart speaker and intelligent assistant makers are entering the scene, namely the Aloha project and Portal, Facebook’s reported video chat device.

Imagine a Facebook speaker with WhatsApp or Messenger voice or video calls? Both apps have more than 1.2 billion monthly active users. For people who want to call or send messages to grandma and everyone else in their life, that’s a great selling point, and one Amazon probably had to consider when it decided to give the latest Echo Show Skype call capabilities.

One major frustration users encounter in the early days of smart speakers with screens like the Echo Show, as well as those on the way from Google and partners like JBL and Lenovo Smart Display, has been the limited number of choices for video calls. As Amazon pushed Drop In, Google pushed Duo, another app that doesn’t appear to have hundreds of millions of users.

If the makers of smart speakers choose to approach the ecosystem of messaging and calling apps the way they’ve opened their hardware platforms to music services like Spotify and Tidal, it would lead to a vastly better experience.

A number of improvements for Alexa and many devices were announced today, but Skype is particularly important because it means that people will actually start making video calls with their smart speaker and achieve the goal stated by most tech companies of bringing people closer to their friends and family.