The news was announced at Ignite, Microsoft’s enterprise technology conference happening this week in Orlando, Florida. The company first unveiled the Surface Hub 2 in May, when it promised the new device would ship in 2019, but it didn’t talk about the two different versions.

Microsoft says the Surface Hub 2S is designed to meet the needs of its existing Surface Hub customers: It runs the current Hub software experience built for an on-premise or hybrid environment. The Surface Hub 2X, meanwhile, will enable such features and functionality as dynamic rotation, multi-user authentication, and tiling.

This upgrade from the 2S to the SX is possible thanks to removable processor cartridges in the hardware chassis on the back of the device. The processor cartridge can be removed, upgraded, and serviced “over time” — that’s Microsoft’s way of hinting there may be more after the Surface Hub 2X, though no promises were made. 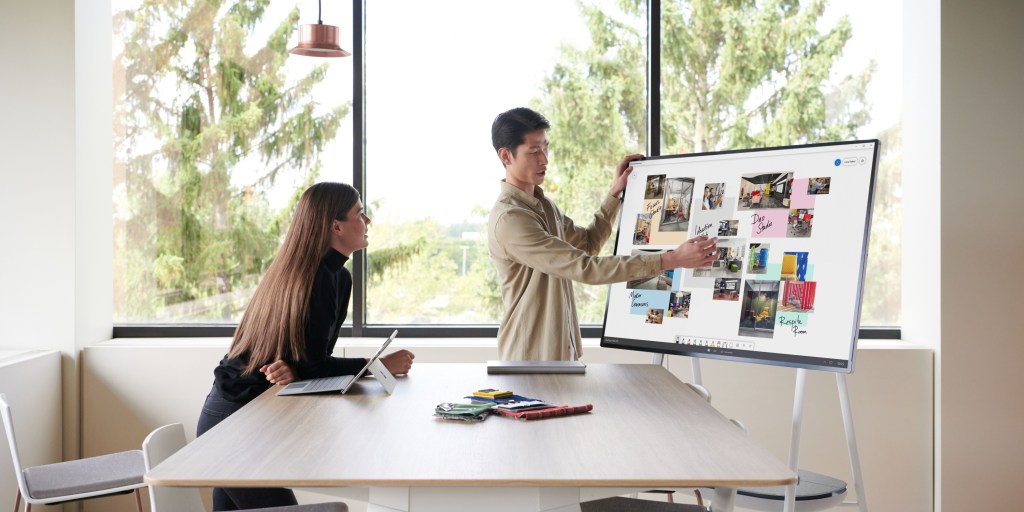 The 50.5-inch Surface Hub has a 3:2 aspect ratio (compared to the original Surface Hub’s 16:9), boosts the resolution to “greater than 4K,” and reduces the weight to between 55 and 77 pounds. The 3:2 aspect ratio brings it in line with Microsoft’s Surface laptops and tablets, and the higher resolution is completely expected (like the improved microphones and speakers), while the reduced weight and size allow the Surface Hub 2 to sit on a rolling easel-like stand for portability or mount to a wall.

It could help convince enterprises to go with the Surface Hub 2 over other digital whiteboards, like Google’s $5,000 4K G Suite-optimized Jamboard and Cisco’s $4,990 Spark Board. But Microsoft is still refusing to share the price tag, and the original Surface Hub, which started at $9,000, makes little sense.