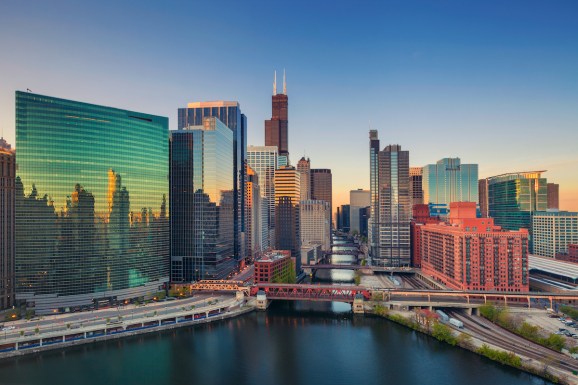 Chicago startups give investors a median MOIC of 5.6 times, considerably exceeding the city’s coastal counterparts. (MOIC is calculated by dividing startup exit value by the total amount of venture capital raised by that startup.) Chicago’s closest competitor is Seattle, at 4.8 times, narrowly beating out Los Angeles, at 4.7 times. New York trails at 4.4 times, the Bay Area at 4.2 times, and Boston at 3.6 times.

While Chicago has consistently driven high investor MOIC, PitchBook’s report suggests that the city is on track to set some new records. With at least 23 exits so far this year and an entire fourth quarter remaining, 2018 might see the city’s most exits ever. As of September 1, Chicago had already been strengthened by more than $1 billion in exits. Driving these exits are startups like Aptinyx and Xeris Pharmaceuticals, which both had IPOs valued at close to $1 billion.

The report shows that Chicago continues to be the epicenter of the Great Lakes venture region, with the city on track to exceed $1.5 billion invested in companies this year. Perhaps what’s most interesting about these deals, however, is the shift in where the venture capital is flowing  from.

The top five firms investing in Chicago are my firm Hyde Park Angels, Pritzker Group Venture Capital, Chicago Ventures, Lightbank, Hyde Park Venture Partners — which are all based in Chicago. In fact, of the top 10 investors fueling the Chicago ecosystem since 2006, only the 10th most-active investor (New Enterprise Associates) is based outside of Illinois.

Additionally, the number of non-local firms participating in Chicago startup deals has fallen slightly or held steady every year since peaking in 2014. With the total amount of venture capital invested continuing to increase, more Chicago startups are able to find capital needed from local investors. This bodes well for Chicago’s ability to retain startups throughout their life cycle.

With over $1 billion already invested in Chicago startups this year, an increasing clip of exits that drive the highest MOICs in the country, and local investors doubling down on their interests in local startups, 2018 is proving to be a good year for Chicago’s ecosystem. Even better is that — with success nurturing further success — Chicago can expect to be enriched by 2018’s venture achievements in the years to come, as well.