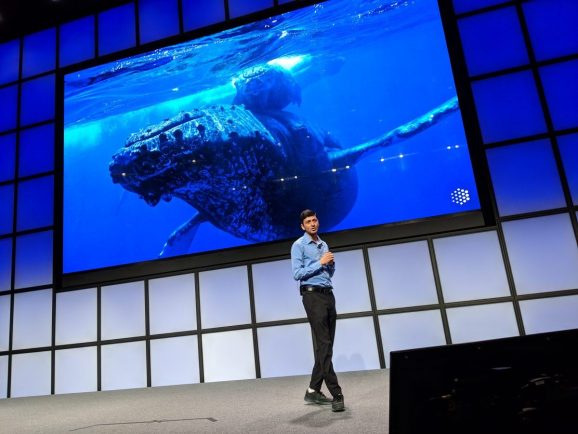 Google AI today announced the AI for Social Good initiative, an ongoing project to apply core AI research and engineering efforts to social good projects both inside Google and among the broader AI ecosystem.

Inside Google, programs supported by the AI for Social Good program include the use of TensorFlow to mitigate traffic incidents in Iowa and augmented reality microscopes to help health care professionals do their jobs.

The sound of whales and illegal logging activity will be central to two other new initiatives being mounted for rain forest and whale conservation.

The Whale Bioacoustics project announced in today’s ceremony at the Google offices in Sunnyvale, California was developed in collaboration with the National Oceanic and Atmospheric Administration (NOAA) and is dedicated to informing shipping companies of the location of endangered whales to prevent deadly collisions.

The models the bioacoustics program uses to identify whales are similar to those available in AudioSet, a collection of audio datasets open-sourced by Google.

During today’s ceremony, Google AI head Jeff Dean highlighted several uses of AI to benefit all people, such as computer vision to detect cancer cells and AI to find habitable planets outside of our solar system.

“Artificial intelligence is not just helping people create more useful products — we use it in a lot of ways throughout many Google products but is also emerging as a really powerful tool for improving the society that we live in,” Dean said onstage. “In fact I’d argue that there’s never a better time to be working in the field of artificial intelligence.”

Google AI researchers have supported the use of AI for the common good in recent past projects like the Lookout app for the blind, detecting diabetic retinopathy in eye images, or predicting flooding or earthquake aftershocks before they happen.

“Those centers are going to help us find and become aware of efforts going on globally that may not be on our radar here in Silicon Valley and help us make sure that we get proposals from people who are doing work globally,” Google.org VP Jacqueline Fuller told VentureBeat in an interview.

Tech giants with a range of cloud-based AI services like the Google Cloud Platform and popular frameworks like TensorFlow have launched a number of initiatives in the past year to encourage engineers inside and outside of the company to tackle problems to help people and the planet.

But with other applications of machine intelligence that can creep people out and some use cases that can be controversial, like providing facial recognition software to the federal government, such programs could also be considered good for business — or for appeasing disgruntled employees.

Facebook AI Research is working with New York University to reduce the time it takes to perform MRI scans, which would open advanced imaging to more people and limit the amount of time patients have to spend in loud, anxiety-inducing MRI machines.

Microsoft launched AI for Earth in December 2017 with $50 million for conservation and increase crop yield. Multi-million dollar initiatives have also been created to assist people with disabilities. A $40 million humanitarian causes initiative made its debut last month.

Amazon, whose Rekognition has been criticized because of its controversial law enforcement uses, is also being used for purposes such as finding missing children.