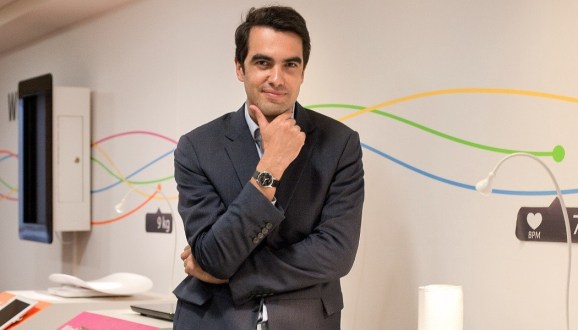 Despite the highs and lows that Alexis Normand has experienced the past few years, his faith in the digital health revolution remains surprisingly unshaken. In fact, it’s grown so strong that he is pursuing two separate but equally interesting paths toward realizing the potential benefits.

The first is his ongoing role as vice president of health care at Withings, the connected health device company that was recently bought back by its French founder after a disastrous acquisition by Nokia. The second gig is head of the Embleema Blockchain Consortium, which has developed a patient medical record system based on the distributed ledger technology.

What links these two experiences, for Normand, is that each in its way is part of a movement that is placing personal health data into the hands of consumers.

“It’s about feeling more empowered,” Normand said. “For a long time, most of the data collected about you was owned by someone else. The fact that people have access to that now, it changes their perspective.”

Read more: How Withings’ Éric Carreel plans to raise his wearables company from the dead

VentureBeat caught up with Normand while he was speaking last month at the INPHO Venture Summit last month in Bordeaux, France.

He was there primarily to speak about the more recent of these two efforts, Embleema, which is in the midst of holding an initial coin offering. The company hopes to raise between $2 million and $3 million to continue expansion of its cloud and blockchain-based software service called PatientTruth.

“There are many health care blockchain companies,” Normand said. “But not many that have launched a product.”

Basically, the idea is to use the blockchain as a secure, trusted way to digitize more patient health records. But putting it on the blockchain, the company wants to ensure that it remains fully accessible to patients. This, however, is just a starting point.

From there, the platform connects this patient data to networks of hospitals, rehab centers, urgent care centers — anywhere data can be gathered — to continue to develop a single digital health care record for each patient. Embleema also wants to make that data available to researchers. To do that, the company wants to distribute blockchain tokens to patients as an incentive for them to share their data.

Embleema’s founders believe this could create a second wave of innovation by turbocharging the amount and quality of data that medical researchers and pharmaceuticals could gather to speed drug development and creation of other breakthrough treatments.

By sharing this data in real time, the company also believe it can help shorten the regulatory approval process by looping in agencies such as the U.S. Federal Drug Administration. Normand notes that the 21st Century Cures Act that was passed in 2016 creates a mandate for the FDA to speed up approvals of new drugs if it could access more real-time patient data.

“We need to build a marketplace, which is why we’re doing an ICO,” Normand said. “There is a logic to this system. Facebook takes your data and owns all the value created out of it. With Embleema, the patients own part of the network with their tokens. The more transactions that happen with their data, the higher the value of the network. Our challenge is to bring people around the table.”

While Normand works on Embleema, he continues to support Withings cofounder Éric Careel’s efforts to resuscitate a company that once seemed poised to become an iconic French startup success before it became a poster child for M&A gone wrong.

Founded in 2008, Paris-based Withings first made a splash when it released a connected scale that sent data over Wi-Fi to a smartphone. It may seem quaint a decade later, but the device was seen as the first step toward building a global connected medical device company. The company would eventually raise about $38 million in venture capital as it rolled out gadgets like connected blood pressure monitors, fitness trackers, and watches.

As the company slowly but steadily grew, an unlikely suitor came knocking: Nokia. The Finnish company had famously exited the consumer gadgets business by selling its handset business to Microsoft a few years earlier. But suddenly, Nokia announced it had acquired Withings in April 2016 for $192 million to be the foundation of a new Nokia Digital Health business.

Instead, the deal unraveled at a breathtaking speed.

Withings was actually bought by a subsidiary called Nokia Technologies, based in Silicon Valley. The company placed its massive patent portfolio in Nokia Tech, with the idea that the royalties would be used to invest in developing new consumer-facing digital businesses. The company hired former Dolby executive Ramzi Haidamus to run Nokia Tech, and the purchase of Withings to create a Digital Health Group was one of its first big moves.

Just four months after the deal, Haidamus was pushed out of the company for reasons that remain a mystery.

Normand recalled that just about every decision made by Nokia from that point on seemed doomed. The decision to kill the Withings brand in favor of Nokia Health provoked a backlash among users. A change in strategy also resulted in Withings products being removed from the Apple store. And all decisions in terms of how to leverage patents and other product development ideas seemed to get bogged down in multiple layers of lawyers and corporate bureaucracy.

By late the following year, Nokia had taken a write-down that indicated Withings was essential worthless, and that it was searching for a buyer. That’s when Carreel re-entered the picture and reacquired the company for an undisclosed sum.

Normand says that while it’s only been a few months, Carreel has turned around the company’s mood. Not to mention that Withings has already released a couple of new products, including a $130 Pulse HR activity tracker and a $200 Steel HR Sport smartwatch.

“From the Withings side of things, people are very happy that Éric is back,” Normand said. “Éric’s not afraid to take risks and he really knows product development.” Certainly, it’s hard not to look at Withings’ two years under Nokia’s thumb as lost time, as the company has watched the Apple Watch expand its feature set steadily since its launch in 2015 to become a full-fledged connected health device in its own right.

Still, a revived Withings and Embleema’s early momentum have Normand believing that the digital health revolution is gaining traction.

“Health care is a very slow sector to move,” he said. “But there’s a good reason for that. You want evidence that things work. But the important thing about the digital health revolution is that you have constant feedback from users. You know how often people use your product and so there is opportunity for continued improvement.

“So we have a lot of evidence that these things are working. And from here, I think things are going to move very fast.”