On-demand restaurant delivery platform DoorDash is integrating with TripAdvisor, meaning you will be able to kickstart your food orders directly from TripAdvisor’s website and mobile apps.

Founded in 2013, San Francisco-based DoorDash now operates in more than a thousand cities across the U.S. and Canada. TripAdvisor claims nearly half a billion monthly visitors globally, and with increasing competition in the on-demand delivery realm, TripAdvisor represents a notable partnership for DoorDash as it looks to increase exposure.

The integration also makes a great deal of sense for TripAdvisor, given that its platform is pretty much the first port of call for millions of people seeking out reviews of restaurants before they order delivery or make a booking.

“Our integration with DoorDash will make it even easier for diners to order food online and get it delivered right to them, wherever they are,” said TripAdvisor Restaurants’ head of key accounts, Evan Becker. “The partnership will also help restauranteurs gain more exposure on our site.” 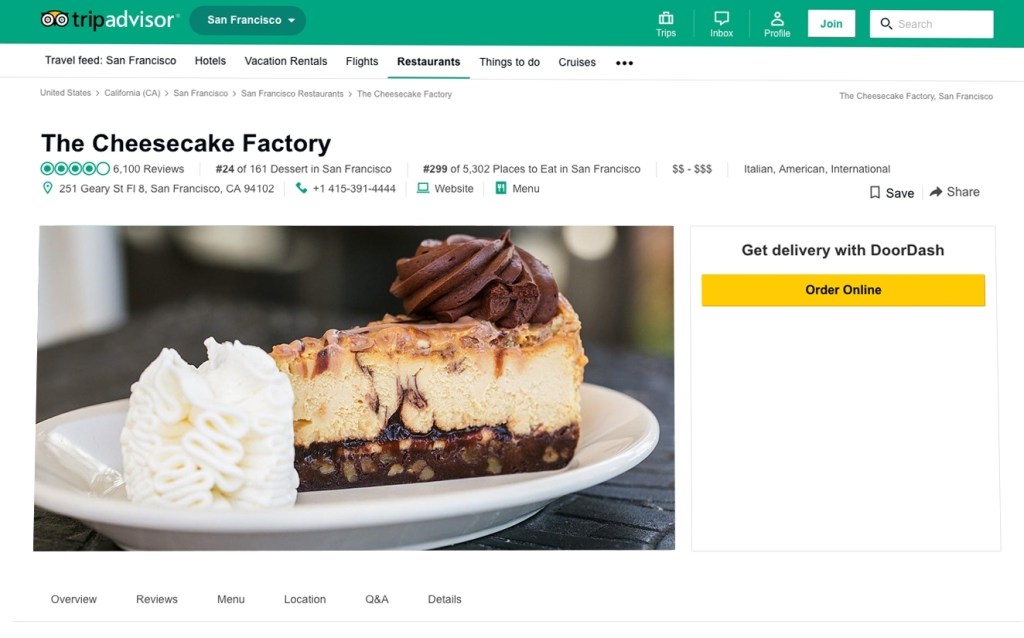 Above: The Cheesecake Factory: Order online through TripAdvisor

It’s worth noting, however, that the transaction doesn’t actually take place within TripAdvisor. Much like an integration with GrubHub last year, the “Order Online” option will link through to DoorDash so consumers can place their order.

As a result of this tie-up, TripAdvisor said it will be adding online order links to more than 24,000 restaurant listings via DoorDash.

A few months back, DoorDash launched a $10 monthly subscription called DashPass for free food deliveries, in addition to a new pickup option. DashPass will be compatible with orders that originate on the TripAdvisor platform.

DoorDash has raised more than $700 million in funding since its inception, the vast majority of which came via a $535 million cash injection earlier this year. Other notable players in the on-demand delivery space include Uber Eats, which is continuing to expand; Postmates, which recently closed a giant $300 million funding round; Instacart, which raised a $200 million funding round; and Deliv, a same-day delivery service that recently attracted Google as part of a $40 million investment.