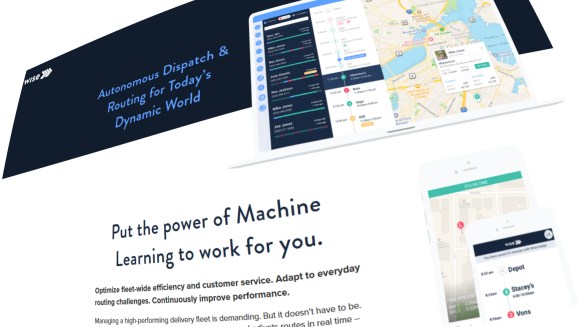 Wise Systems, which develops autonomous routing and dispatch software for delivery fleets, has raised $7 million in a series A round of funding led by Gradient Ventures — Google’s AI-focused investment fund.

Additional participants in the round include Neoteny, E14 Fund, Trucks Venture Capital, and Fontinalis Partners.

Founded out of Cambridge, Massachusetts in 2014, Wise Systems targets retailers, distributors, shippers, and couriers with software that automates many of the processes involved in getting goods from A to B. This includes scheduling and monitoring routes, with a built-in mechanism that rearranges stops and adjusts routes in real time based on anticipated delays caused by traffic and other factors. It leans heavily on machine learning smarts to monitor data points and improve delivery fleets’ performance over time.

Feeding into this is a mobile app for drivers, which lets them log arrival and departure times, capture signatures, and record notes manually, while on the customer-facing end a hub tracks delivery status and real-time arrival schedules.

Wise Systems had previously raised around $1 million, and with another $7 million in the bank it plans to double down on its operational growth and invest in R&D for AI-powered delivery management.

Google parent company Alphabet has operated a number of investment funds for some time already, but last July Google itself announced a new venture fund targeting early-stage AI startups. Since its inception, Gradient Ventures has invested in fewer than a dozen startups, including biomedical startup BenchSci.

The delivery and logistics industry is ripe for investment, with a number of big technology companies pushing resources into the sphere.

Walmart recently launched Spark Delivery, a crowdsourced pilot delivery program similar to Amazon Flex, while Amazon announced that it is looking to create a network of independent delivery fleets to bolster its existing network of third-party providers. Last year, Uber launched its Uber Freight trucking business as it sought to expand beyond its consumer ride-hailing and food delivery businesses. As it happens, Uber revealed last week that it will begin using machine learning to provide shippers with accurate rates up to two weeks in advance.

Meanwhile, Google has also invested in the delivery and logistics realm — in October it joined a $40 million investment in same-day delivery platform Deliv. Given activity elsewhere in the technology industry, it should come as little surprise that Google’s AI-focused venture fund would seek to invest in a company like Wise Systems.