Realmax has officially taken its AR/VR ambitions from dream to reality, having evolved its Qian headset from an intriguing prototype at the 2018 CES to actual production hardware at the 2019 CES. And unlike so many of the devices shown each year at CES, Qian actually contains some compelling differentiators: It’s lightweight, tetherless, and offers a very wide-angle video display by augmented reality headset standards.

Co-developed by a former Microsoft executive and a Chinese company with manufacturing expertise, Qian uses a Qualcomm Snapdragon 835 system on chip and stereoscopic 1080p displays to deliver a dramatically more powerful AR experience than Microsoft’s HoloLens — a proprietary 16:9 visual system that was bright, vividly colored, and detailed in our hands-on testing at CES.

Though the headset isn’t as fancy-looking as Magic Leap One, it features a much wider 100.8-degree field of view, filling enough of your eye space to feel immersive, and is compatible with prescription glasses rather than requiring special lenses. Realmax also says Qian can be shifted from AR to VR modes, a potentially compelling feature we didn’t get to try out.

The screens are paired with binocular 6DoF tracking and a 9-axis IMU sensor so that wearers can actually move around in a 3D space and see virtual objects that appear to be real — or as real as the Snapdragon 835 can make them. A demo showed off a fairly convincing 3D model of a car that could be inspected up close from any angle, and multiple headsets on the same wireless network can let users interact with one another using virtual objects within an actual physical space. 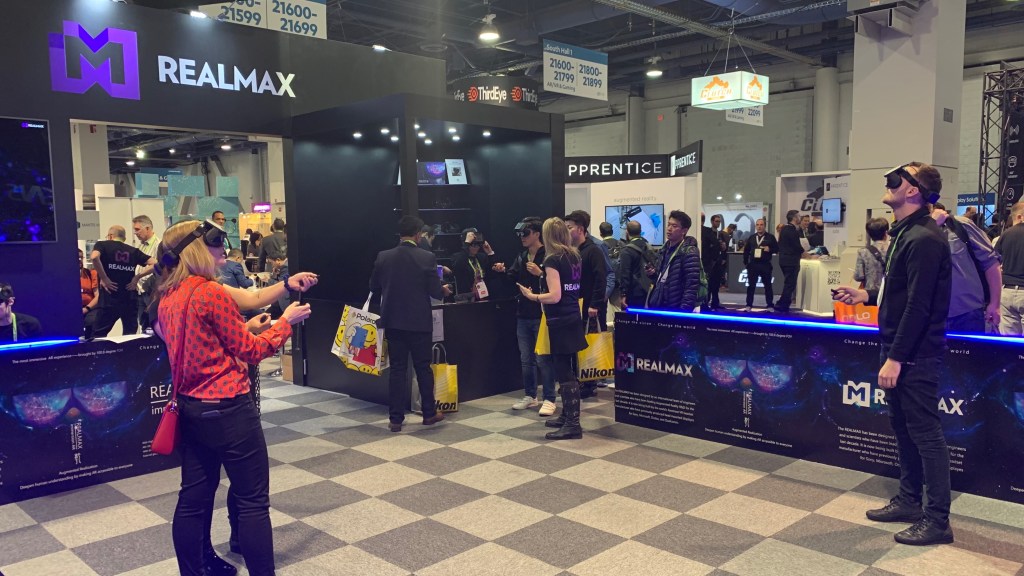 Above: RealMax Qian AR glasses being used in a large, multi-wearer environment.

One missing element in the core hardware is hand tracking, but there’s a USB port on the headset’s front that can connect easily to a Leap Motion gesture sensor. Otherwise, a basic controller similar to the one used for Oculus Go or Google Daydream lets users interact with virtual content. All of the apps are stored within the headset, so there’s no need for a Magic Leap-style puck or a nearby computer.

Another key to Qian’s appeal is its pricing. Realmax says that it will be priced just under $1,000, which combined with its impressive AR performance should make it a popular alternative to HoloLens — a comparatively limited device sold for three to five times the price. Beyond industrial settings, Realmax hopes to see Qian used in education, medicine, and retail applications.

According to the company, Qian has just finished its first pilot production run, and the company will soon be producing as many units as possible to meet anticipated demand. It won’t have the next-generation AR market to itself, though: Rivals such as Nreal and DigiLens have also shown new AR glasses at CES, and Microsoft is expected to reveal HoloLens 2 in the not-too-distant future.