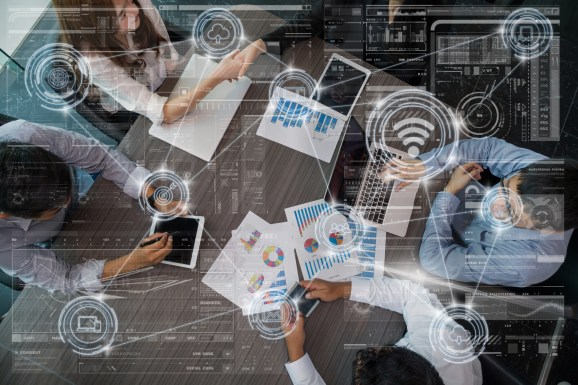 Image Credit: Photographer is my life/Getty

The answer is that solutions have costs. First among these is that you don’t have time to use all of these apps: You only have 24 hours in a day, but every year, there is more and more technology for you to use.

The most overlooked economist of the 20th century, Ronald Coase, focused on friction. He noticed that friction between supply and demand — discovery costs, transaction costs, integration costs, switching costs, delegation costs, and usage costs — defined the shape of the economy. Like a physical law, these frictions explain why one company doesn’t do all things, why there’s an app for everything, and why everything still isn’t perfect.

What results from usage costs is a ruthless competition to out-use technology, that forces everyone to work harder and harder to extract the most utility from these tools. Technology was meant to liberate us. But everywhere we are in chains. Instead of being the masters, we have turned into the slaves.

The Greeks had a word, dynamis: the potential that exists within things. Every year, the dynamis of technology increases, but our usage only captures a small fraction of that expanding potential.

Even though technology is limited by science, progress continues because, so far, technology has only captured a small fraction of the dynamis of science — it is already hundreds of years behind, so there’s room to catch up.

In the same way, even if technological progress stopped today, and there were no new apps, it would take us, say, two hundred years before we caught up to the usage potential of the personal computer, the internet, and cloud-based software applications.

So why haven’t we solved this mysterious problem, the problem of solutions? Is it even solvable? Yes, it is a solvable, practical, problem. But, blind spots and biases have led us down blind alleys.

The venture capital industry has ignored its institutional bias for products over services. Every aspiring unicorn builds its own walled-garden software platform with a restricted API, creating a tragedy of the commons in terms of usage costs. The next Salesforce can’t build on top of Salesforce, or make Salesforce ten times more useful — without limiting its destiny by violating Machiavelli’s doctrine to “not build upon the power base of another.” PayPal made this mistake by building on top of eBay, which ultimately forced Peter Thiel’s hand in acquisition, although he knew that ultimately PayPal’s value would eclipse eBay’s.

Venture investors have an equally severe bias for vertical over horizontal solutions. Ricardo’s specialization has led to hyper-specialization but has failed to progress to meta-specialization — the dialectic is stalled. Applications are increasingly narrow, and returns driven by acquisition instead of IPO have made it harder for large funds to compete with proliferating micro funds.

VCs like X-for-Y pitches (Uber for laundry!), they don’t like Y-for-all-Xs pitches (YouTube: videos for the entire internet!) anymore — times have changed; that was when the internet was still young. Ironically, in the young blockchain bubble, there was perhaps too much horizontal and not enough vertical. But in the relatively mature industry of cloud-based software applications, venture investors are suspicious of horizontal breakthroughs that aren’t driven by some fundamental technological breakthrough.

The smartphone cycle bundled many devices into one device, and the app cycle unbundled those devices into different apps. While investors are aware of cycles of bundling and unbundling, after a decade of unbundling, nobody is preparing for the inevitable bundling. Now, the AI digital assistant cycle is moving towards a single bot that can do everything: ultimate power and simplicity at the front end, ultimate complexity at the back end.

Following Coasian logic, in this futuristic post-AI economy, companies would get larger and smaller: hyper-efficiency would enable most companies to become smaller, and a few companies to become larger, shrinking or growing by one or two orders of magnitude. For example, the largest employer presently has two million employees, but in the future perhaps there will be a company with 20 million or even 200 million employees. And there would be an even larger ocean of freelancers in the economy than there is today, frictionlessly contracting for the lake of small businesses and the island of enterprises. When the usage cost variable is altered, I imagine extraordinary change.

Despite all the hype about General Artificial Intelligence, VCs are smart enough to know that startups can’t compete with tech giants in heavy R&D, so the industry of ambition shies away from its own greatest ambition. VCs are investing in narrow AI applications, but again, they don’t solve the overall usage costs problem, they just add more complexity and power to the system.

And tech giants are smart enough to indulge the hype, even though a General AI assistant capable of doing meaningful knowledge work is not actually on the horizon. Even though it is a moonshot, they keep investing in it because whoever owns the assistant relationship with the consumer is a gatekeeper for all other applications and vendors: a monopolist’s dream.

Three horizontal, meta-specialization approaches — General AI, Tech-Enabled Digital Assistant Services, and Robotic Process Automation — are underway to solve the biggest problem in the world: solutions. All of them are flawed. Perhaps the right combination of them will succeed.

Some believe that the biggest problem currently facing the world is General Artificial Intelligence replacing humans with robots, and that the solution to this problem is Universal Basic Income. Bah! The irony! Software won’t replace us with robots anytime soon, but software has already turned us into robots! What we need is a solution to free us from solutions, software (or software-enabled services) to free us from software, so that we can be humans again.

In The Question Concerning Technology, philosopher Martin Heidegger suggests that the way for humans to enter into a freeing relationship with technology is for humanity to unlock the dynamis of technology so that technology can unlock the dynamis of humanity. The message is: fear not! That is, don’t fear the solution, fear the problem. The problem is that we’re slaves to technology. There’s a solution for everything, except for this Sisyphean usage curse. We’re wasting our lives, squandering our creative potential, doing work that could be done for us. So, solve the usage costs problem!

What would the world be like, if solutions had no usage costs? If the economy was free of Coasian friction? Technology is at its best when it is invisible. You wouldn’t even notice all of the products and services empowering you to be creative, strategic, and human. You would never need to do work somebody else could do for you. You wouldn’t need to be organized. And then, who are we, and what do we do? Are we capable of genius? These are questions for Nietzsche’s “supermen” of the future. Once we have delegated our work, the real work will finally begin.