Dropbox may be better known as a cloud-storage platform for individuals and businesses to store and share files, but tied into this is a need to play nice with companies’ broader workflow. This is why Dropbox has been increasingly integrating with third-party services such as Google’s G Suite, Google Cloud Identity, Salesforce, Microsoft Office, and many more.

Dropbox doesn’t want to be a standalone silo for storing files — to flourish, it knows it must improve productivity by integrating with tools from myriad industries. And crucially, it must also build more of its own utilities to keep users on board.

Dropbox has emerged as a popular tool for those in the digital media realm, including filmmakers and podcasters. Rather than trying to share gargantuan files over email, creators collaborate in the cloud so that everyone has access to the same video and audio files. Dropbox has worked with video-sharing platforms such as Vimeo for a while, and it also integrates with online editing suites such as WeVideo and video collaboration platform Remark.

Now, Dropbox is doubling down on its efforts to aid the cloud collaboration process with a new feature called time-based commenting. In a nutshell, it’s about allowing Dropbox users to share feedback that refers to a specific point in a video or audio file.

Dropbox has allowed collaborators to share feedback on files for a while, including annotating documents with comments that refer to a specific section. This applies to audio and video too; however, up until now you would have to write inside the comment which part of the video you’re referring to, such as: “You need to cut out the section from 00:25 to 00:30 — it’s pointless.” 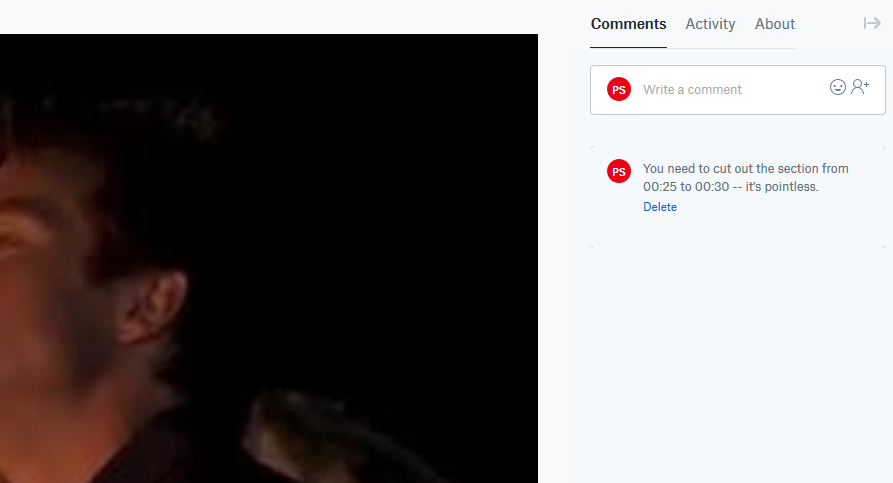 Above: Dropbox: Commenting on a video

Now, without leaving Dropbox, you will be able to place a comment that links to a point in the video or audio file’s timeline. And as with existing file-commenting functionality in Dropbox, you can @-mention other users to let them know that something needs their input.

Additionally, this comes with “enhanced playback” support that includes the ability to adjust the speed of a video and scrub through 1080p video previews that include thumbnails, while audio previews are visible via waveforms.

This functionality isn’t exactly new in the video-editing realm — Vimeo, for instance, also offers a time-coded feedback feature. But the Dropbox version isn’t aimed at those working on any specific video platform — it’s for those with the raw files. Dropbox said that two-thirds of the films that are being showcased at the Sundance Film Festival next week were made with the help of Dropbox, so this feature will likely receive a warm response.

It’s worth adding here that while time-based comments can be added by anyone with a Dropbox account, only videos shared by premium accounts — such as Dropbox Professional or Dropbox Enterprise — will support this new feature. Additionally, the feature is currently only available through Dropbox.com and the iOS app, though Android support will be added soon.