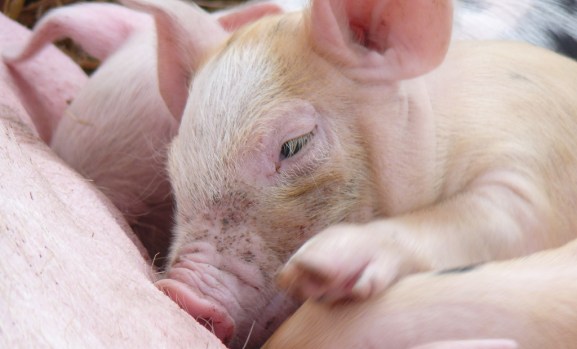 A dying baby piglet makes a unique sound. Spend enough time around pigs and you can distinguish squeals they make when they’re being crushed, SwineTech CEO Matthew Rooda told VentureBeat in a phone interview. Approximately 6 million piglets are killed every year when the mother sow rolls onto them, so preventing such incidents could save pork farms billions every year, according to National Pork Board data gathered from the U.S. Department of Agriculture.

“I grew up in the industry before going to college, and … we figured: If we can hear with our own ears, there’s no way we can’t produce a technology that can do the same thing,” Rooda said. “We went and collected a lot of data from the environment and captured the sounds of piglets getting crushed, brought that in and tagged that data, and were able to develop an algorithm around that through through machine learning.”
Once a microphone detects that distinctive sound, a chiropractic impulse and vibration is used to stand up a sow pig.

The power behind SwineTech’s solution to save piglets is durable IP67 waterproof microphones from Vesper, a company that demonstrates the robustness of its microphones by dipping them into beer and boiling oil, bringing them on whale watching trips, leaving them in dust storms, and other fun tests you can see on the company’s YouTube page.

Backed by Bose Ventures, Baidu, and Amazon’s Alexa Fund in a $23 million funding round last year, Vesper makes microphones for home appliances like smart speakers and TV remotes as well as extreme environments. It sees applications for its microphones virtually everywhere.

“I think what will happen in the next wave as you have things like an Echo Dot or Google Home Mini that were plugged in, or you have something like a TV remote that you had to press a button on to activate the voice assistant, and I think what you’re going to have is these kind of small, battery-powered voice nodes throughout your house,” Vesper CEO Matt Crowley told VentureBeat in a phone interview.

Earlier this month at CES, Simplehuman introduced a garbage can that uses a Vesper microphone to respond to simple voice commands; its battery power is expected to last one year.

Vesper works with hardware manufacturers to power things like TV remotes and smart speakers, but also sees opportunities where AI and durable microphones can change multiple industries. Later this year, Vesper will debut a microphone that can withstand sound as high as 150 decibels that can be used in places like jet engines or heavy machinery in factories.
“All the devices made in the future are going to have some level of sensing ability and intelligence,” he said.

Listening to save lives

More companies are using durable microphones to improve their products.

The 2020 Porsche 911 will include microphones to hear the sound of water splashing in the wheel well to tell a driver to turn on wet weather mode for a safer drive.

Jabra Elite 85h headphones due out later this year will use artificial intelligence and microphones to detect noise levels to increase noise canceling during your commute, then turn it down when you’re talking to someone when you get home.

Crowley believes microphones trained to listen for specific sounds could reshape a number of industries.

“Insurance is going to be massively impacted,” Crowley said, convinced that sensors will move it from a mindset of recovery from loss to prevention of loss.

“The entire business model is shifting from one of ‘use statistical data and trying to price things so that you can recover from that event’ to ‘use sensors to get real data about what’s going on in your insured asset,'” he said.

Ambient listening with microphones that require little power can be used to detect termites or water in basements, or to differentiate between the sound of hail and a hammer on the roof of a home.

For example, a device from LifeDoor that listens for the sound of smoke alarms made its debut at the Consumer Electronic Show (CES) earlier this month that automatically closes doors inside a house in an attempt to reduce the spread of smoke or fire, reduce property loss, and better protect human lives.

Ambient listening devices in home appliances could also factor into elder care or home security systems. Alexa Guard, which made its debut last fall, will alert a homeowner if an Echo speaker detects the sound of an alarm or breaking glass.

The prospect of microphones everywhere is a total nightmare to privacy advocates. Especially after things like the FaceTime bug and still-unexplained sharing of recordings of Alexa users, the prospect of devices that are constantly listening in the home might be too much for some consumers.

Crowley said Vesper has seen an increase in products that deploy AI without the need to share data or be connected to the internet.

“Our chip partners are more moving into chips that have a lot more robust ability to do local voice processing and even some level of conversational processing,” Crowley said.

“We’re agnostic as to how the system is architected but I will say, I think there will increasingly be a push to do more of the processing locally, you know, in device,” he said. “Certainly privacy is the place where the edge has the edge.”