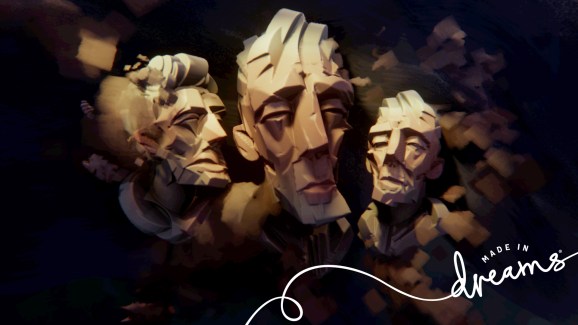 People are going to make outlandish claims about Dreams. They’re going to say it’s a strange, unwieldy beast that was born from a wild imagination. And it’s true that Dreams is vast, impressive and bursting with potential. But if you have even a passing knowledge of VR, you’ll know that Media Molecule’s latest shares at least a little of its DNA with the likes of Tilt Brush, Quill, and Medium. Crucially, though, Dreams promises a big step beyond those platforms.

Dreams is essentially an attempt at an accessible video game development engine. But you knew that; you’ve seen the videos of P.T. and Dead Space remade inside of it, or the tweets with alarmingly detailed creations. You’ve already seen what’s possible here. This is not your normal game; it’s an entirely new platform.

There’s a very different set of barometers for what makes it “good,” then. It’s so enormously big that the mere thought of covering it all in one article is a little overwhelming. So I thought I’d take a page out of Meda Molecule’s book; I’d compartmentalize. Dreams makes everything digestible by cutting it up and taking it one step at a time, so why don’t we? 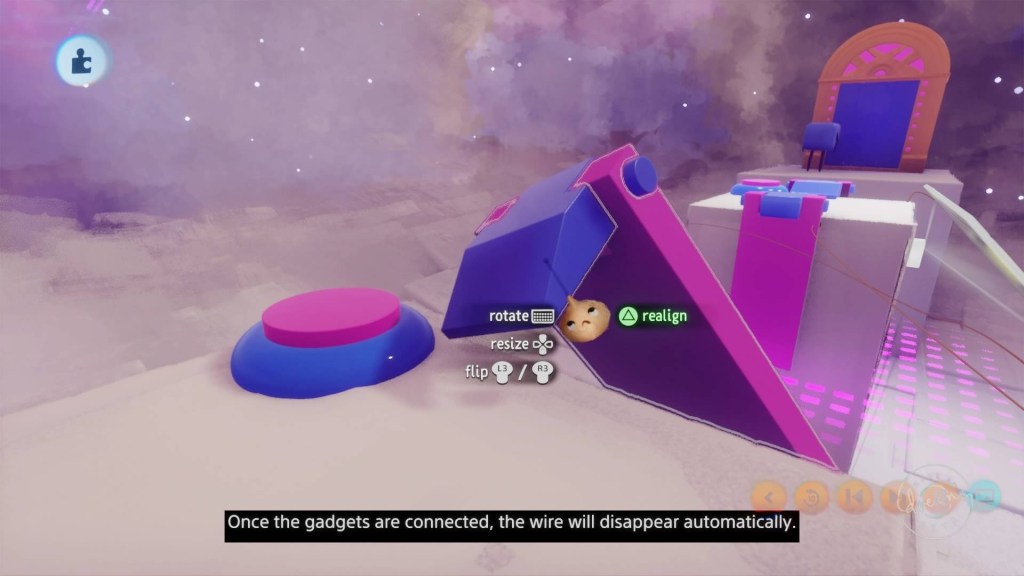 Above: Dream’s UI is much better than what we’ve seen in LittleBigPlanet.

For starters, it has to be said that Dream’s DualShock 4 interface is nothing short of a stroke of genius. Your gamepad is a mouse, keyboard, camera, paintbrush and a traditional controller all at once. Dream’s creation mode is made up of a series of menus to access different parts of development from sculpting to Logic (more on that later). You navigate this initially intimidating library with an imp, a small little creature that’s essentially the pointer on a mouse. DualShock 4’s motion controls are employed to great effect; once you know what items are where you can start scrolling through Dreams with almost the same intuition you enjoy on a PC.

But the controller doubles as a keyboard too. Dreams has a range of shortcuts that are executable by holding the L1 button. If you wanted to grab and move an object, for example, you’d just grab R2 and then move it. But if you wanted to clone the item in question, you’d hold L1 first then hold R2. Simple little additions like this make the overall creation process a much more manageable concept once mastered.

Dreams has got me looking at my Dualshock 4 in an entirely new way. I don’t just see the gamepad I use to play shooters and platformers but also a tool. Media Molecule’s reinvention of a videogame staple is, simply put, a revelation.

Move controllers are a bit of a different story, though. I can see how, with extensive practice, they could be more versatile tools than the gamepad. After a few hours of trying to get to grips with them, they’re my biggest pain point in Dreams right now, though. Camera movement can feel erratic and overly sensitive, and it’s often difficult to grasp which way to move the controllers to get the view you want. Moving through the environment is also much more of a hassle without DualShock 4’s analog sticks. There are more helpful shortcuts employed to streamline navigation, but they’re hard to grasp on Move’s confusing button layout.

It’s especially concerning seeing as we don’t know if Dreams’ VR support will work with the DualShock 4 just yet. Having said that, the added depth perception may go some way in helping me tame them. 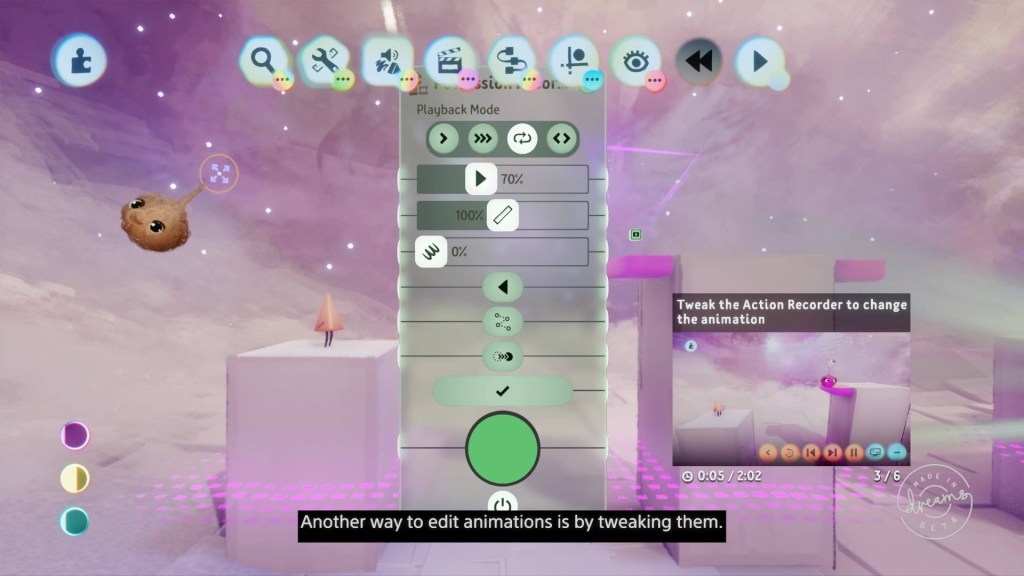 Above: Dreams’ may feel daunting, but it does a good job of teaching it tools.

Dreams’ biggest victory so far, though, is its tutorial setup. While the game works its magic to make content creation as easy as possible, it’s not a miracle maker. You will have to commit multiple hours to the game’s tutorial section to learn how to make stuff in Dreams. And you’ll need to revisit it time and again to refresh your memory. Making an introductory process that’s accessible, engaging and fun was arguably the most important thing the game had to pull off. Media Molecule does so with flying colors.

While the beta doesn’t include every tutorial, there’s everything you need to get started. Each segment has a video overlay. Think of it like a YouTube ‘How To’ video, with narration guiding you through every step. It’s not a case of ‘watch and repeat’; you’re free to move at your own pace. At first you’ll follow along with every precise step, mimicking the moves you see on the video. Missed a line? Just quick press the 10 second reverse button to jump back without any fuss. Video in the way? Grab it as you would any other object and move it to a new location.

As you grow more confident, though, you’ll find yourself even outpacing the tutorial. Dreams introduces its ideas in incremental steps, building upon the foundations it’s already laid. When you know what you’re going to need from which menu you can race ahead and grab it before your instructor has even shown you. If you get a little ahead of yourself and miss a step there’s no punishment or hindrance; no one’s judging you or telling you that you’re doing it wrong. The game trusts you to figure it out for yourself.

Testing out your work couldn’t be simpler, either. You can instantly enter ‘Play Mode’ through the pause menu, which brings everything to life. If you need to check a character can jump a gap then just play that section. If it doesn’t work, just go back and rewind the tutorial back to where you went wrong. This feels lightyears ahead of the groundwork established in LittleBigPlanet, a game of comparatively slight ambition. I remember slugging through those tutorials with an ever-depreciating desire to create. Dreams’ tutorials left me raring to go and feeling like anything was possible. 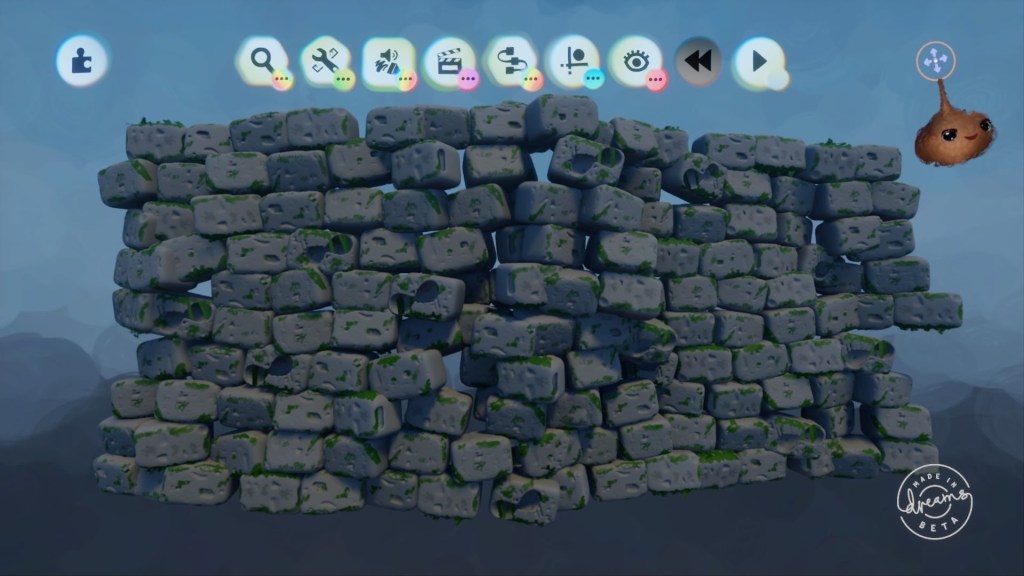 Above: A wall may not seem all that creative, but Dreams gives you the tools to take it in many directions.

I am not a good artist. People will tell you that there’s no such thing as a ‘bad’ artist but, believe me, I’m not a good artist. My Tilt Brush creations are probably the ugliest the platform has seen. Dreams, however, made me feel like I could create things that would at least pass as real game assets. In fact, I made that wall above, I’m very proud of it.

How did I do it? I went into the game’s sculpt mode, selected the Rounded Cube and made three brick-shaped models. I used the game’s Grid Mode to make the measurements accurate though, thinking about it, I could have just cloned one of them. Anyway, I then used a simple tinge tool to give a grey-ish castle vibe to each brick. Then I went back to the shape selector but, instead of adding new shapes, I pressed the triangle button to turn them into shaped erasers. With these, I proceeded to randomly cut out chunks of different shapes and sizes in each brick to give them an eroded look. Each looked different, too.

After that I selected the paint tool and chose the ‘Snap To Surface’ guide, which meant I’d paint directly onto objects. I found a mossy green and dotted it along the edges of each brick to add to the archaic feel. Once each brick was finished, I span the camera around and repeated the process on the back of each. I now had six individual brick faces. Assembling them into a wall was just a matter of cloning and spinning them. Once I cloned and assembled a few I’d group them together, clone the group and flip it over to make another section of wall. The entire process took maybe 20 minutes.

Simple as it may be, this is the first 3D creation I’ve ever made that I feel proud of. And Dreams offers plenty more tools to go the extra mile; effects can fuzz up objects to give them the appearance of grass, a flow tool makes surfaces run like water, and another makes them swirl like smoke. Painting has a sort of automated sketchiness to it that’s almost impossible to go wrong with. If you need mechanical precision, a Mirror Guide will reflect your every move. Dreams has a massive library of tools to make building 3D assets simple, enjoyable and even professional. 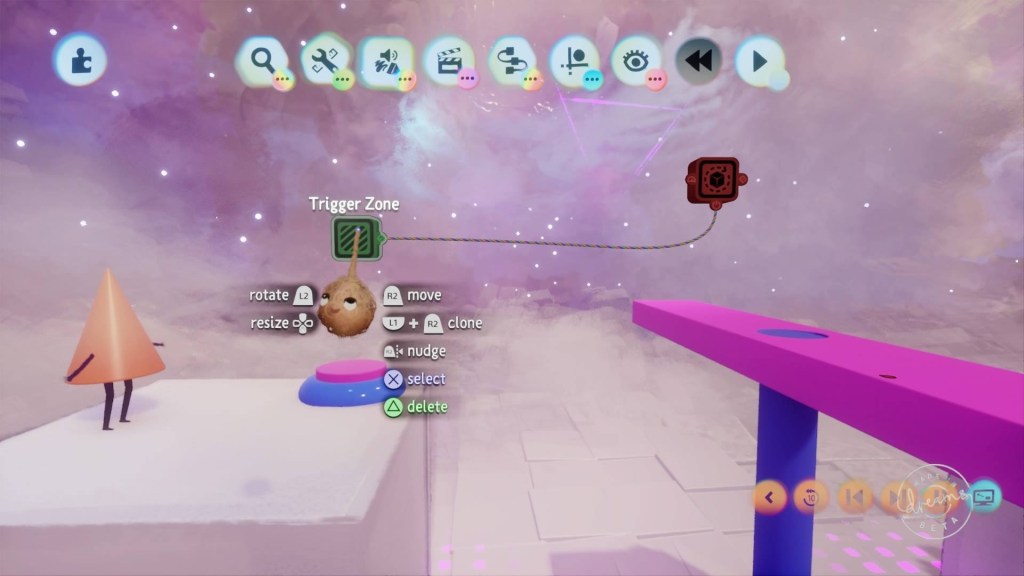 Above: Dream’s building works because it makes sense.

There’s a lot of simple stuff to Dreams’ Creation mode. Sculpting, resizing, coloring etc are all pretty easy to grasp, especially if you’ve played around with VR creation apps. But what about the more complicated stuff? The actions, orders and mechanics that make characters walk and worlds feel alive? All of that is assigned to Logic, one of the game’s biggest breakthroughs.

Logic is basically a super-simplified coding system. It’s the menu you’ll go to when you want a switch to activate a door, when you want to define NPC’s AI, when you want to make vehicles and so much more.  They’re made up of little tiles you place in the game world and contain their own menus to tweak. If I want a button to lower a bridge, for example, I assign it a Counter tile. In its menu, I set it to recognize when one player character has stood on the button (represented as a customizable trigger zone). When it picks that up, it sends a signal to a Trigger tile that activates an animation that lowers the bridge. These tiles are linked up by wires I’ve set. Still with me?

It’s simplified, yes, but it’s still not easy. I’ve spent hours trying to wrap my head around the incremental steps needed to perform even the most basic of tasks, tying my brain in knots to get through the process. As I’ve already said, Dreams takes commitment, but with time you can work out what you need to do, and you’ll get there faster than any other engine out there. The game rewards your dedication more instantaneously than anything else I’ve seen.

But the rabbit hole goes deep and this is one area of the game that still overwhelms me. I took a look at the Logic assigned to the character in the tutorial above, for example, and found an exhaustive list of modifiers that I had no idea about. For first-timers like myself, it’s clear that building your way up to more ambitious Dreams creations is going to require investment akin to a meaty RPG game. But I feel positive that I could get there, and that’s what Dreams is all about. Above: Dreams in VR is about promise so far.

So how does all of that tie into VR? Well it harkens back into what I’ve often talked about with Dreams; promise. The beta doesn’t support PSVR, but Media Molecule says it will be there on day one of the full release. I’ve spent hours getting used to the base game to try and give myself a headstart. Frankly, I consider all of what I’ve just written about to be a warm-up. Dreams is already creating amazing experiences on a flat screen, but I’m expecting VR support to be transformative.

First and foremost, imagine a platform where people will be able to make their own wave shooters, cockpit racers and Star Wars tributes with relative ease. I’m pretty sure I could do a half decent attempt with my limited experience already. But I can’t wait to see what the really gifted Dreams devs do with VR; I want to see characters that feel real, worlds to get genuinely lost in and games unlike any that have come before. With Dreams, that all feels tangibly possible.

We don’t have a full release date for Dreams just yet.