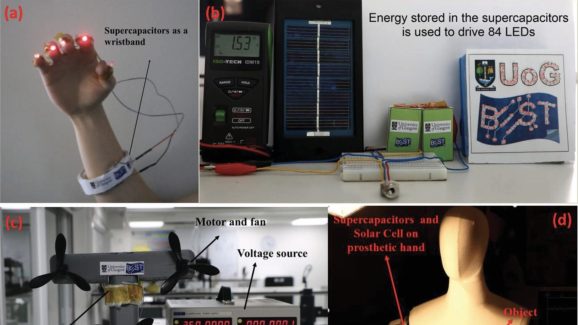 Four years ago, a thin, strong material called graphene was being eyed as an eventual replacement for silicon in circuit boards and processors, and it has since found applications in everything from futuristic contact lenses to headphones. Now researchers at the University of Glasgow are using graphene to create next-generation flexible batteries — more accurately, supercapacitors — that are capable of recharging using solar energy, as well as discharging enough energy to power advanced wearable devices.

As explained in the journal Advanced Science, the researchers used layers of graphene and polyurethane to create an inexpensive, flexible supercapacitor that passes solar power through the top layer to similar storage surfaces below. Unlike a traditional battery, the supercapacitor doesn’t include a lithium-ion cell or other means to hold its power for months at a time, but would be able to rapidly recharge when exposed to the sun.

Tests have shown that the supercapacitor can continue to store power after 15,000 uses without a significant loss. By comparison, common rechargeable batteries begin to see marked degradation of their original capacities after 500 to 1,000 charge cycles, and require replacement — generally within two to three years of daily use.

The other innovation offered by the graphene supercapacitor is its power output. Prior supercapacitors have generally been limited to 1 volt or less of output, but this one delivers 2.5 volts, enough energy for certain portable and wearable devices. In demonstrations, researchers showed the supercapacitor powering a string of 84 LED lights and a high-torque motorized prosthetic hand, either of which could now operate fully off solar power.

It’s worth noting that 2.5 volts isn’t enough energy to power current smartwatches: Apple’s and Samsung’s latest models use 3.7 to 3.8 volt batteries — but they also can’t come even close to recharging 15,000 times without replacement cells. By the time these supercapacitors are ready for the market, more power-efficient chips, screens, and sensors will surely be out there, though there will still be a need for some solar charging surface area. The researchers envision that happening through a wristband.

They’re also considering other applications. Project lead Professor Ravinder Dahiya said that the supercapacitor “takes us some distance towards our ultimate goal of creating entirely self-sufficient flexible, solar-powered devices which can store the power they generate.” He expects prosthetics, health monitoring wearables, and electric vehicles to use the technology.

The full report is available here, and is certainly worth reading if you’re interested in how portable and wearable devices will be powered in the foreseeable future.