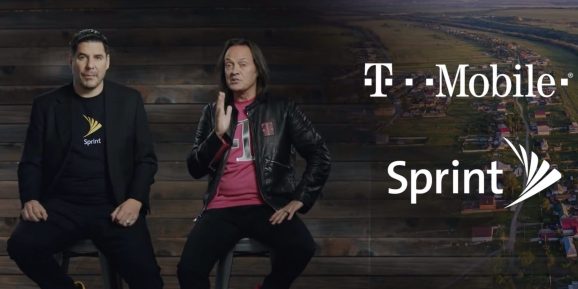 Ever since T-Mobile agreed to acquire Sprint last April, the companies have referred to the merged entity as “New T-Mobile,” suggesting that their combined assets will be more than the sum of their parts — if regulators approve the deal. As the regulatory process rolls on, the companies are using NewTMobile.com, a site that hypes up their promises to create “robust competition in the 5G era,” to encourage customers to contact the FCC in support of the merger.

Featuring even more exclamation marks than a typical T-Mobile press release, the New T-Mobile site offers customers — especially rural ones — a number of reasons to back the merger, notably including the promise of new jobs. According to the most recent numbers, the company says it will create 3,625 new full-time jobs in 2019 if the merger goes through this year, with “more U.S. employees on payroll from Day One than the prior standalone companies do now.” T-Mobile specifically promises 12,000 jobs across “up to five new customer care centers” and 600 new retail stores located in small towns, plus nearly 100,000 locally hired engineering and construction jobs specific to its 5G network buildouts.

While this isn’t the first time T-Mobile has mentioned improved rural broadband as a justification for the merger, that’s a persistent theme of the site, including a promise to expand in-home broadband options for the 48 percent of U.S. households without competition for 25Mbps+ service. In addition to offering faster in-home service to more people, the carrier expects that “cost-conscious Americans [will have] the opportunity to cut the cord with their broadband provider, eliminating this monthly expense while benefiting from our amazing service.”

The pitch isn’t limited to rural or cost-conscious customers, though. T-Mobile claims to have “deployed nationwide [4G] LTE twice as fast as Verizon and three times as fast as AT&T,” a feat it intends to repeat with 5G. Over the past year, T-Mobile has enunciated a viable strategy for that claim: Initially, it will blanket the United States with 600MHz towers offering a slower but still competent version of 5G service, then add Sprint’s 2.5GHz towers to provide faster service in suburban and urban areas, and eventually roll out millimeter wave small cells in dense, high-demand settings.

T-Mobile is also promising additional services after the merger, interestingly referencing “VR” along with “innovative offerings” in video and internet of things (IoT) services. While the carrier has previously mentioned plans for new video subscription and enterprise-scale IoT services, it hasn’t said much if anything about plans for virtual reality, which other carriers and technology companies have said will be significantly bolstered by low-latency, high-bandwidth 5G networks.

Just like Verizon, which last week launched the Let’s 5G! website to get customers to lobby local officials for 5G buildouts, T-Mobile is hoping that excited readers will contact the government with messages of support. Under a “Support 5G For All” heading, the site offers a link to the FCC’s Electronic Comment Filing System, as well as guidance on how to back the company’s “pro-consumer Un-carrier strategy” with a public comment. Historically, the FCC hasn’t shown great interest in actual grassroots public comments, but if you’re moved by the contents of the site, go for it.