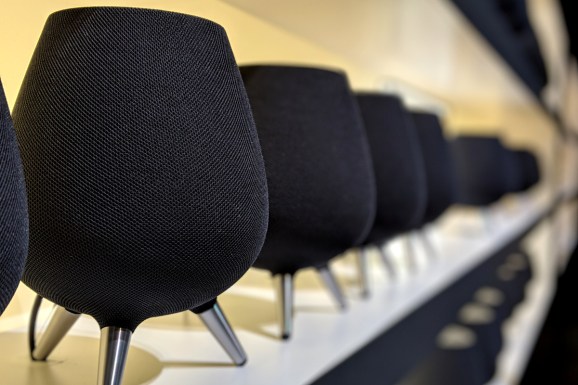 The news was shared today at Unpacked, an event at the Bill Graham Civic Auditorium in San Francisco where Samsung introduced new devices like its flagship S10 smartphones, the Galaxy Fold that can unfurl into a 7.3-inch tablet, and Galaxy Buds with Bixby.

Galaxy Home will be the first smart speaker to operate with Samsung’s Bixby smart assistant.

The speaker sits atop a tripod and includes spatial intelligence that ensures sound quality by taking into account the size of the room; it also offers Spotify-enabled music recommendations.

Last fall, Samsung introduced the Bixby Developer Center and Bixby Marketplace — encouraging third-party developers to contribute to the range of experiences users can have with the intelligent assistant.

A second Bixby-powered speaker from Samsung may also be in the works, according to SamMobile.

Updated 12:07 pm Feb. 21 to include update from Samsung spokesperson that the Galaxy Home will be released in the first half of 2019.