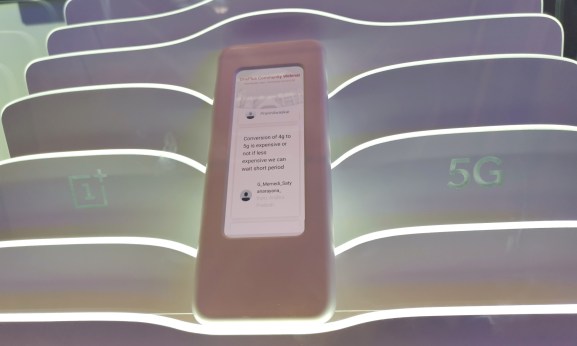 OnePlus 5G in all its, ahem, glory

OnePlus has given us a first glimpse of its long-awaited 5G smartphone, though the reveal felt a little too much like a “me too” PR episode in a week that has seen several 5G phones unveiled.

With Samsung officially unveiling its 5G device at its own pre-MWC event last week and Xiaomi following suit yesterday — on the same day as LG — it’s clear the various smartphone makers are feeling pressured to show their 5G hand. Indeed, Oppo kinda sorta announced a 5G phone yesterday too, though it didn’t really reveal much in the way of details — like photos, a name, a price, specs, or a launch date.

And today it was fellow Chinese phone manufacturer OnePlus’ turn to kinda but not really reveal what it has in store for 5G.

We already knew that OnePlus was cooking up some 5G goodness for 2019, and according to a report in USA Today last week, the company will launch its 5G phone in the U.K. and Finland in Q2 2019, which is roughly in line with competitors’ timelines. However, Samsung, Xiaomi, and LG have all been willing to not only reveal what their devices look like, but let people handle them, while OnePlus kept its offerings demurely apart.

On display at MWC today were two phones housed inside glass booths, with both covered in their entirety by a protective case for “confidentiality,” according to the company. Only the screens were visible.

On one device was a live feed showing messages left by OnePlus community members.

The other device was used to demonstrate a live 5G high-definition, low-latency cloud gaming session, with someone playing a game from the prototype phone that was beamed onto a large screen.

We can’t really garner a great deal from this “sneak peek,” as OnePlus called it — we do know that the device will have a rather elongated screen, and we know from separate reveals that it will have a Snapdragon 855 processor and will likely be priced at under $1,000. But we don’t know if this will officially be the OnePlus 7 or a separate device altogether, and — more importantly — we still don’t really know what it will look like.

In fairness to OnePlus, the company didn’t pitch this unveiling as a launch or anything like that — it called it a “first look.” However, concealing the phone in a glass case with its body hidden tells us a little bit about what stage the company is at in its 5G development.

Though OnePlus has promised a launch in the next few months, keeping its phone under lock and key suggests the company has yet to finalize a lot of aspects of the phone — including its design.

With today’s glimpse, OnePlus is tacitly acknowledging the other 5G devices that have “launched” in the past week. Ultimately, the company just wants to remind the 5G hype machine that it too is working on something — even if this first showing leaves a lot to the imagination.