A Canadian cybersecurity startup is emerging from stealth today with a fresh $15 million in funding from Alphabet investment arm GV, with participation from startup studio Expa, Amplify Partners, and a host of additional “strategic investors.”

Founded in early 2016, Cmd is the brainchild of former Hootsuite senior security engineer Jake King and Expa partner Milun Tesovic. Expa, for the uninitiated, was created in 2013 by Uber and StumbleUpon cofounder Garrett Camp, and it pitches itself as a “company that creates companies.” A few years back, Expa launched its own startup accelerator with $100 million in outside funding, and it’s in this environment that Cmd was born.

Cmd is emerging as data breaches are rampant across industries, with the likes of retail giant Target, extramarital affairs website Ashley Madison, consumer credit score company Equifax, and — most recently — hotel giant Marriott all suffering major hacks in recent years. Such high-profile breaches may have positioned data security as a major talking point for millions of consumers, but as King told VentureBeat, the underlying cause of these hacks is nothing new. “These high-profile attacks were possible due to security flaws and vulnerabilities that have been plaguing security teams for decades,” he said.

Many security platforms are designed to protect companies from “zero-day” attacks (that is, an exploit of a hitherto unknown vulnerability), but Cmd has been setting out to build something that improves security internally within companies. The platform is designed to protect against insider threats without impeding development and operations (DevOps) teams, while “bridging the divide” between DevOps and security operations (SecOps) departments.

According to King, a major threat lies in companies’ “underdeveloped approach” to securing their infrastructure, usually Linux-based systems. Vulnerabilities can emerge due to the “rampant use” of shared keys, unmanaged privileged access to a company’s systems, or a general lack of insight into server activity.

“Cmd was born out of the problems that I experienced while leading the security operations at Hootsuite,” King told VentureBeat. “During my time there, I went searching for a security vendor. While most vendors were focused on threat detection to prevent sophisticated zero-day attacks, I was looking for a proactive solution that could help me improve security hygiene across the company. Pretty quickly it became clear the latter didn’t exist — there was a gap in the market between the tools security vendors were building and the problems that actually kept practitioners up at night.”

And so King and his partners elected to build a product themselves, one that gives companies granular controls to monitor and authenticate user activity on their systems.

One of the key features of Cmd’s platform is something called Triggers, which enables users (e.g. system admins) to enforce customized policies specific to an organization, as well as industry-standard policies, to protect against attacks. It’s similar in concept to how IFTTT’s recipe/applets work — admins can set up a trigger query that stipulates the rules under which an action is made. For example, a trigger such as “when Lizzie tries to begin a session after business hours or on the weekend” could lead to an alert being sent to an admin.

Other triggers and actions may prompt a user to activate two-factor authentication before they can access cloud service APIs, for instance, or require a supervisor’s authorization before a new user is added or changes are made to Linux accounts.

Elsewhere, Cmd can be used to block potentially risky code executions, while admins can remotely view live sessions and physically stop a session and log the employee out.

Here, a user called Kevin is typing commands into a Linux terminal (foreground), while the background interface is the web app that gives admins control of the session — whether to just watch, review details, or otherwise interact with the live session. 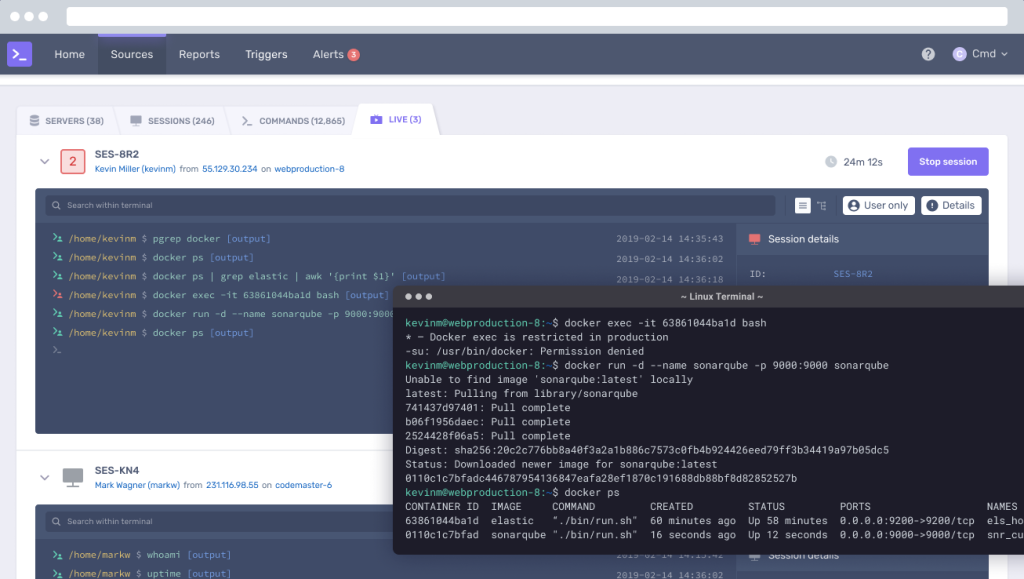 Cybersecurity has drawn significant investment in recent years, and 2019 is already shaping up for more of the same. In the past month alone, we’ve seen the likes of Varmour nab $44 million for its proactive cloud cybersecurity platform, while Illumio secured $65 million for its breach-detection smarts.

Prior to now, Cmd had raised $6.6 million, and with its fresh $15 million in funding it plans to grow its product and engineering teams. Alongside the cash injection, GV general partner Karim Faris will now join Cmd’s board of directors.

Though Cmd has had paying customers since last spring — including Uber and Zenefits — the company has very much flown under the radar until today. “We’ve focused on word of mouth and our connections to establish relationships with our customers, so far,” King added.

Today, Cmd counts a staff of 25 based in its native Vancouver. In addition to King and Tesovic, the startup’s founding team includes the security engineers behind Unix-like operating system QNX, which was acquired by BlackBerry (then Research in Motion) in 2010.