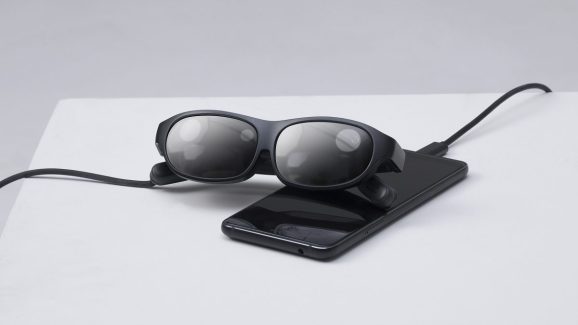 Back in 2017, a concrete report suggested that Apple was working on augmented reality glasses with a target release date of 2020. As the date draws near, a research note suggests that the accessory is still coming next year — albeit with a new wrinkle. Respected analyst Ming-Chi Kuo (via Economic Daily News) now says that the AR glasses will depend heavily upon a tethered iPhone and will serve largely as a display.

Kuo’s report appears to differ from those filed previously by Bloomberg’s Mark Gurman, who said in November 2017 that prototypes of Apple’s AR device were running on a custom version of iOS internally dubbed “rOS,” short for “reality operating system.” The report suggested that the AR device would differ from VR headsets that used smartphones as their processing engines and screens.

According to Kuo, however, the iPhone will handle everything from computing and networking to indoor and outdoor positioning for the AR solution — a significant offloading of processing akin to last year’s Magic Leap One and more recently shown Nreal AR glasses, which require users to wear or carry small, physically tethered computing devices as they walk.

Using an iPhone for processing would be a practical compromise for Apple and follow a recently announced Qualcomm initiative to use Snapdragon 855-powered 5G smartphones as “XR Viewers.” Apple’s past key modem supplier is now helping Android device makers develop lightweight AR/VR glasses that tether to phones for everything from processing to networking, location services, and local storage. Prices for the headsets have not yet been announced but would certainly be much lower than the $2,300 to $3,500 asking prices of Magic Leap One and Microsoft’s HoloLens 2, which include their own computers.

Apple has made no secret of its intentions in the AR space. CEO Tim Cook has openly spoken of his belief that AR will be a critically important future technology and has multiple times hinted at Apple’s work on initiatives past its ARKit software for iPhones. The company also acquired AR lens company Akonia Holographics and reportedly twice made efforts to buy Leap Motion, a maker of novel hand tracking solutions for extended reality devices. Most recently, it appointed a dedicated marketing chief for AR, a necessary step in the lead-up to a hardware release.

As is always the case with upcoming Apple products, however, it’s advisable to take each report’s details with a grain or two of salt. Beyond Kuo’s and Gurman’s reports, Cnet claimed last April that Apple was developing an ultra-high-spec AR device with dual 8K displays, 5-nanometer chips, and 802.11ay Wi-Fi to wirelessly connect to a dedicated Mac-like processing unit. Even by Apple rumor standards, the story was hard to take seriously because most of the named technologies weren’t expected to be ready for a commercial product by the claimed 2020 release date.

By contrast, an iPhone-tethered AR headset would be entirely achievable over the next year. Kuo expects that it will be mass-produced sometime between the fourth quarter of 2019 and the second quarter of 2020, making a 2020 release date entirely possible.