Over a one-month period spanning January 28 through February 26, OpenSignal compared the average performance of “5G E capable” phones and “all others” on AT&T’s network with similarly equipped devices on T-Mobile’s, Verizon’s, and Sprint’s networks — a fair test in that all four of the major U.S. carriers have deployed pre-5G, late-stage 4G technologies across the country. Only Sprint’s network fell behind AT&T’s performance, though that’s no surprise, as the fourth-place carrier’s network has lagged behind its rivals in performance for years.

OpenSignal says that AT&T’s 5G E devices saw an average download speed of 28.8Mbps, compared with 29.4Mbps from T-Mobile, 29.9Mbps from Verizon, and 20.4Mbps from Sprint. Devices without the late-stage 4G hardware inside clocked 18.2Mbps on AT&T, 19.4Mbps on both T-Mobile and Verizon, and 16.3Mbps on Sprint. 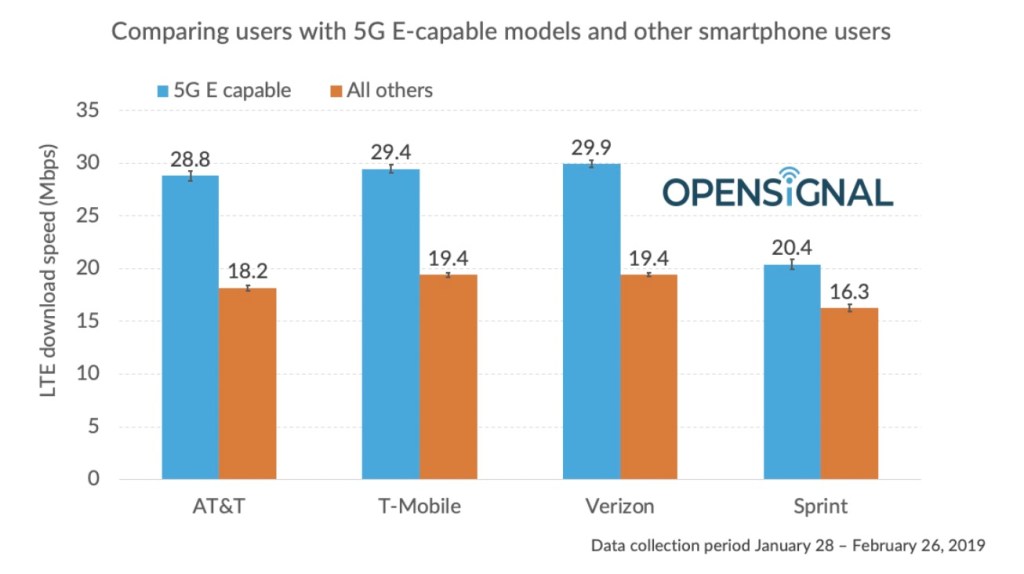 None of these numbers is particularly impressive, partially because even the 5G E-capable devices’ highest average data rate — 29.9Mbps — is less than one-tenth the “typical” speed Verizon has promised for its true 5G service in the U.S. Upcoming 5G networks are expected to offer typical speeds in the 300-600Mbps range, with peaks in the 1-2Gbps range, depending on various factors. Some users of “4G” devices have seen occasional speeds in the 150Mbps range from existing 4G towers.

Verizon, T-Mobile, and Sprint have all criticized AT&T for marketing the late 4G offering with any 5G branding, an effort that began early this year with the launch of 5G E badges on Android phones and iPhones that had LTE Advanced Pro hardware inside. Sprint went further and sued AT&T for misleading the public, a case that’s currently making its way through New York courts.

“The 5G E speeds which AT&T users experience are very much typical 4G speeds and not the step-change improvement which 5G promises,” says OpenSignal. “However, AT&T’s 5G E example highlights the extent to which 4G experiences differ. Perhaps carriers should show a different icon for smartphone users when experiencing the latest 4G technologies, like LTE Advanced Pro?”

The quote hints at one caveat: OpenSignal’s testing isn’t comprehensive, in that it isn’t solely reporting the performance of AT&T phones when they’re displaying 5G E branding and connected to “5G E” towers. That’s most likely because it can’t, but also because there’s no way to know when other carriers’ phones are connected to unmarked cell towers with the same LTE Advanced Pro technology. As such, the results are based on the overall experiences of similarly capable devices.

AT&T has also launched a mobile 5G network in parts of 12 cities, with further expansions coming in 2019 and 2020, but it hasn’t yet marketed expected speeds to customers. Verizon will launch its mobile 5G network in 30 cities during 2019, starting with two cities on April 11, while Sprint and T-Mobile are expected to follow later this year.