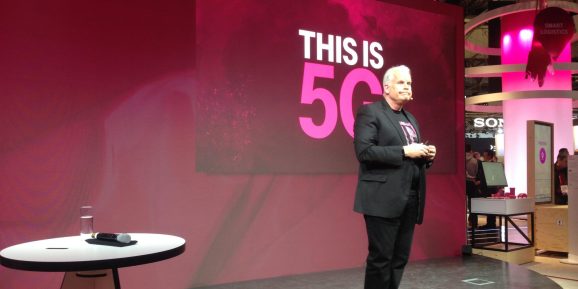 Neville Ray, CTO of T-Mobile, speaks at the 2018 Mobile World Congress in Barcelona.

Shortly after Sprint announced today that it will begin rolling out its commercial 5G services in May 2019, its intended merger partner T-Mobile told Cnet that its 600MHz 5G service won’t start until the second half of the year, due to a lack of 600MHz 5G devices.

Last year, T-Mobile said that it would launch its 5G network in the first half of 2019, with a 30-city plan offering a seemingly aggressive response to the accelerated 5G rollout timetables of competitors Verizon and AT&T. But whereas its larger rivals initially deployed high-speed, short-distance millimeter wave 5G transmitters, T-Mobile instead focused on lower-speed but longer-distance 600MHz radios that could blanket “hundreds of square miles” with 5G service.

Though T-Mobile said earlier this month that it has rolled out 600MHz towers across 2,700 towns and cities within 42 states, the carrier apparently couldn’t find a handset manufacturer to build a phone with 5G support for that frequency. While 5G phones will be able to share certain radio frequencies with 4G phones, the 5G and 4G signals are different, so a handset maker would need to support both the 600MHz frequency and 5G signaling on that frequency.

Thus far, handset makers have focused most of their energy on making 5G phones with 28GHz to 39GHz millimeter wave transmitters, and/or “sub-6GHz” transmitters in the 2.5GHz to 3.7GHz range, as most of the world’s cellular carriers and regulatory agencies have coalesced on those frequencies for 5G service. T-Mobile was an outlier in banking heavily upon low-frequency 600MHz spectrum for 5G, and promised to pair its country-blanketing 600MHz network with Sprint’s more urban- and suburban-focused 2.5GHz network upon their merger.

Sprint has announced three 5G devices for its network. By comparison, while T-Mobile spent much of 2018 trash-talking its competitors, it did not have any actual 5G devices to show at last month’s CES show in Las Vegas, instead relying on 4G phones and Wi-Fi for an AR demonstration, and Intel 5G base stations for a computer-focused 5G-over-600MHz streaming demonstration. Thus far, the carrier has confirmed only that it will sell the Samsung Galaxy S10 5G, which includes millimeter wave 5G hardware that will not be of much benefit on T-Mobile’s network.

T-Mobile’s German parent company, Deutsche Telekom, has been building European 5G services under its own brand and the T-Mobile name over the past year. Poland received the first official T-Mobile 5G network last December with a launch in Warsaw.

Updated at 10:30 a.m. and 1:03 p.m. Pacific: This article has been updated to note T-Mobile’s nuanced position on the 5G rollout. Specifically, a T-Mobile spokesperson has denied that the carrier is delaying its 5G launch, explaining to VentureBeat that:

It is true that devices won’t be capable of supporting that spectrum until later this year, but we are still launching 5G on other spectrum bands in 1H, as soon as devices are in customers’ hands.

When asked for a list of the non-600MHz spectrum bands T-Mobile will be supporting during the first half of 2019, the spokesperson said “millimeter wave,” and pointed to a new series of tweets between T-Mobile CTO Neville Ray and Cnet regarding the alleged delay.

In short, though T-Mobile has said relatively little about its millimeter wave plans over the past year, it’s now saying that it will offer millimeter wave 5G in unspecified areas before 600MHz 5G handsets become available. To that end, Ray suggests that T-Mobile will sell 5G phones in the first half of 2019, so there’s “no delay,” but that the “meaningful” (600MHz) devices won’t arrive until the second half of the year.

Regardless, consumers shouldn’t expect T-Mobile’s heavily-discussed 600MHz 5G service to be available during the first half of 2019. And they should now be waiting to hear more specifics on the carrier’s plans for millimeter wave 5G deployments, if that’s what’s launching soon.