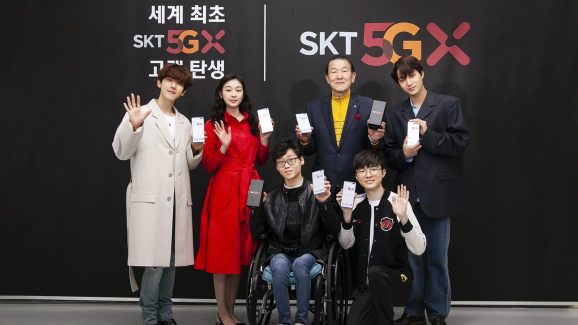 Although Verizon appeared yesterday to have beaten three South Korean cellular carriers in the race to commercialize mobile 5G, last-minute maneuvering in two time zones means it could come down to a photo finish. In a late night press release, SK Telecom says it activated 5G service for six Korean celebrities at 11 p.m. Wednesday — roughly two hours before Verizon said it had commenced sales of mobile 5G devices and services in two U.S. cities.

On the one hand, jostling over “world’s first” bragging rights is somewhat silly, particularly given the comparatively small area covered by Verizon’s mobile 5G network and the similarly tiny number of people initially signed up by SK Telecom. But as both the U.S. and South Korean governments have pushed to launch 5G services, the race has become a matter of national pride, with both countries’ key carriers and chipmakers enlisted to bring the next-generation wireless technology to market ahead of schedule.

SK Telecom’s first group of 5G subscribers includes two members of a K-pop music group, an Olympic medalist, an esports player, a para-swimmer, and the company’s longest subscriber. SK Telecom selected these individuals as 5G ambassadors for a launch ceremony held yesterday and said they were the world’s first 5G smartphone subscribers. Samsung’s Galaxy S10 5G is the only 5G smartphone currently available in the country.

It doesn’t appear, however, that 5G devices or services are available to a wider audience of non-celebrity users in South Korea yet. Despite an Associated Press report that all three carriers “abruptly” turned their 5G networks on early in an effort to stay ahead of Verizon — a last-minute change approved after a meeting with government regulators — it’s unclear whether any of the carriers are actually selling 5G subscriptions today. For its part, SK Telecom says it will begin selling the Galaxy S10 5G to “general customers” on the previously announced April 5 start date.

Expect plenty of additional 5G news and disputable “firsts” as 2019 progresses. AT&T says that it launched a mobile 5G network with hotspots late last year in 12 cities, though actual availability and performance of the hotspots remained question marks even after the launch. By comparison, South Korea’s carriers say that their networks will cover over 80 small and large cities this week, with both Samsung and LG 5G phone options becoming generally available this month.