Awair, the company behind a range of air quality-monitoring products, has raised $10 million in a series B round of funding led by the Westly Group, with participation from iRobot, Altos Ventures, Emerson Electric, and Nuovo Capital.

Founded in 2013, San Francisco-based Awair develops various pieces of hardware designed to detect toxins and other pollutants in the air at home and in offices.

The eponymous Awair device tracks “invisible fine dust and chemicals” and serves up personalized recommendations to address its findings, while Awair Glow plugs directly into an electrical socket to display the status of the air, using a color-coded LED. Awair also offers a special baby edition designed for kids’ bedrooms. 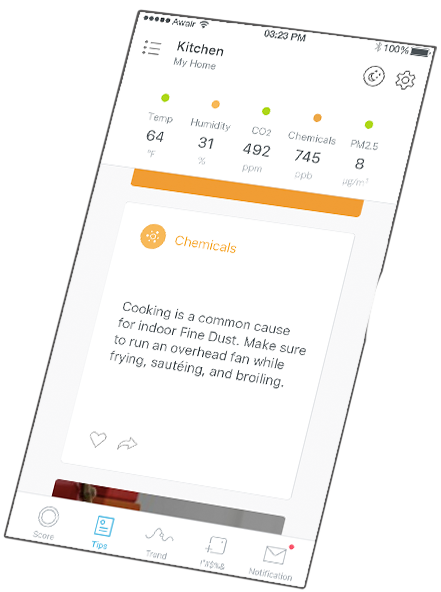 Awair had previously raised around $11 million, and with another $10 million in the bank it plans to “increase production” to meet demand for its products, while also investing in R&D for potential new products.

While most people are aware of the nasty fumes that pollute their cities, they may not realize that the home environment can also host all manner of invisible pollutants from things like deodorants, scented candles, mold, cleaning products, and poorly ventilated areas. Sub-par domestic air has been linked to a number of diseases, including asthma and even lung cancer, according to the British Lung Foundation.

“Air impacts all aspects of our health and well-being,” noted Awair cofounder Ronald Ro. “There is a massive opportunity in how we design, build, monitor, and control our environments. Current technology for built environments is not optimized for occupants’ health and productivity. Awair exists to make sure we are productive, safe, and healthy.”

From connected doorbells to smart thermostats, homes are becoming increasingly “smart,” so it not surprising to see the rise of connected air quality control contraptions. Awair actually links in with the broader IoT smart home ecosystem, including Nest, Amazon Echo, and IFTTT.

A number of companies are developing air quality monitoring tools, including Dyson, Plume Labs, and LaMetric, but Awair has managed to build an impressive roster of customers, particularly in the enterprise realm. Clients such as WeWork, Airbnb, and Harvard University use Awair’s Omni device to monitor air quality in their offices.

Nabbing cleantech VC firm the Westly Group as a lead investor is also notable, given some of its previous portfolio exits, which include electric car giant Tesla.

“Over the last few years, we have been impressed with the insights Awair has provided on how our environment directly affects our well-being,” added Steve Westly, managing partner at the Westly Group. “We’re confident that Awair will continue to empower people with real data that allows them to live a healthy lifestyle.”