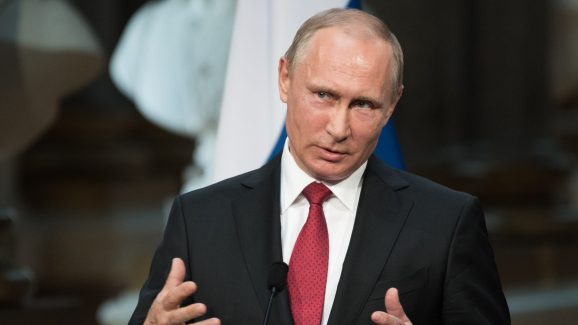 Vladimir Putin, the president of Russian Federation, on May 29, 2017.

Governments and telecom companies across the world have acknowledged the importance of 5G wireless technologies, but one country — Russia — is quietly attempting to undermine trust in the standard, according to a New York Times report. The newspaper has accused Russian broadcaster RT America of stoking health-related 5G disinformation in an effort to delay other countries while Russia prepares to belatedly launch the new technology.

The New York Times report suggests that disinformation-tracking firms New Knowledge and Fianna Strategies have unearthed evidence of a Russian campaign to sow doubts about 5G, using RT America — “the cat’s paw of Russia’s president, Vladimir Putin” — to distribute propaganda. According to Fianna head Molly McKew, the Russian government hopes to get “democratic governments tied up in fights over 5G’s environmental and health hazards.”

As early 5G networks have launched across multiple countries, RT has aired seven alarmist programs this year alone, including sensational phrases such as “5G Apocalypse” and “Experiment on Humanity,” while telling viewers that 5G “might kill you.” In one report, RT claimed children exposed to 5G towers would develop nosebleeds, learning disabilities, and cancer — disinformation spread on TV, internet videos, Facebook, and YouTube. Hundreds of smaller blogs and websites pick up the claims and repeat them, often without noting the Russian origin of the stories.

Russia’s efforts to spread disinformation are well documented at this point. Most famously, multiple U.S. agencies concluded that the Russian government manipulated social and traditional media to sway the results of the 2016 U.S. presidential election. The paper explains that RT operates by offering its platform to discredited or fringe voices, promoting campaigns against vaccination, climate change, and GMO foods “to sow discord and widen social divides.”

In the case of 5G, RT has used loaded terms like “wireless cancer” and “radiations” to refer to 5G signals, promoting questionable “research” that flies in the face of generally accepted scientific evidence. For instance, despite RT’s claim that “[t]he higher the frequency, the more dangerous it is to living organisms,” scientists note that 5G’s higher frequency wireless signals are actually less likely to penetrate human skin than earlier technologies and will likely have even less impact on living organisms.

Meanwhile, efforts to launch 5G networks are underway within Russia itself, and the New York Times reports that Russians have embraced even more extreme views on the high-frequency wireless signals: It’s believed that they can be used to heal wounds, fight hair loss, rejuvenate skin, and treat cancer. RT has defended its reporting, citing “lots of unanswered questions” about 5G and suggesting that it is acting responsibly to consider public health.

New Knowledge suggests that Russia’s tactics amount to “information warfare,” hypocritically discrediting a technology it’s simultaneously working to adopt. Along with China, Russia was conspicuously omitted from a 5G security meeting attended this month by over 30 countries, due to suspicions of its interest in impeding security initiatives.