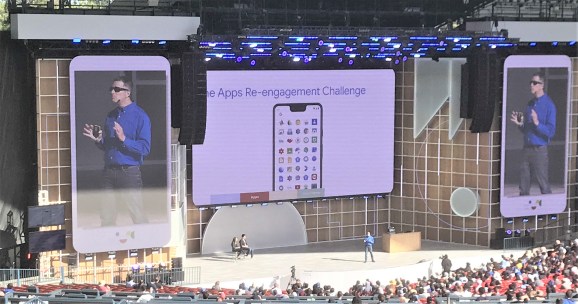 Google is trying to convince Android smartphone app developers that integration with Google Assistant is a way to spark re-engagement among users. The tactic was tested last week at multiple sessions at Google’s annual I/O developer conference.

“Why extend your Android app to the Assistant? What’s in it for you? Well we know that there are challenges for re-engagement for mobile apps, and we think that part of that is because there’s friction in the app experience today,” Google developer advocate Daniel Myers told developers onstage at I/O last week.

Using your voice to get something done with an Android app may cut the number of touches and actions needed from eight down to three, Myers said.

“It will unlock a much faster and deeper Android experience than ever, thanks to Google’s advances with on-device AI, but we know that mobile apps will continue to be the foundation of how users get things done on Android, and so we envision a seamless connection with the mobile ecosystem to be a key feature of the next generation assistant and were excited to work with you to make that happen via app actions,” he said.

App Actions transfer intents and commands from Google Assistant directly to an app and will let users do things like order Dunkin’ Donuts, buy stock with Etrade, send money with PayPal, or start to track an exercise with the Nike Run Club app.

“I think this in some ways an evolution of that idea, like can we just gather the parameters in the first invocation and pass it directly to the app, and we also see that it’s easier for developers, because all the work it takes to do this is all in Android Studio, all in their APK, they don’t have to build a separate experience,” Google group product manager Brad Abrams told VentureBeat in an interview.

Google showcased App Actions for developers for the first time at I/O last year, while Apple’s Siri Shortcuts, a similar service for app developers, made its debut last fall.

App Actions then launched in developer preview last week. A public launch is planned in the coming months, Abrams said. Google initially began to integrate Android apps and Google Assistant last year as a way to complete experiences that start with voice apps or conversational actions.

Claims of app engagement increases with Google Assistant connections seem premature, since App Actions won’t be made publicly available until this summer. No data has been collected that demonstrate Google Assistant’s effectiveness as a re-engagement tool, Abrams said.

“We do see that users and using fewer and fewer apps, and some of it could be that there’s just so many icons on the phone and how do people really know what they want, and we think being able to say with their voice what they want will be an easier way for users to connect with their apps,” he said.

With Lens, Google wants to use computer vision to index the physical world like the web, allowing people’s cameras to translate text it sees or highlight top items on the menu at restaurants. With Google Assistant, people should be able to do things about as fast as they can think of an action, and with tools like Duplex for the Web, people should be able to use language-understanding AI to book restaurant reservations or rent a car.

More than 50% of respondents to a 2018 PricewaterhouseCoopers study said asking questions was a common thing they do with a voice assistant on a monthly basis.

App Slices were introduced last year to serve up content and data from apps. So you can ask the Nike Run Club app “How many miles did I run today?” and the response can be served up without ever leaving Google Assistant.

Google’s ubiquitous and comprehensive voice strategy, rooted in the removal of friction from purchases, was a main theme at Google’s conference and central to its pitch to thousands of developers. While it’s unclear to what extent Google Assistant integration will impact Android app download rates or downloaded app re-engagement levels, it seems clear Google doesn’t plan on limiting Google Assistant to voice apps.

Instead, it’s fusing together an amalgamation of content and services, making new experiences by leveraging its Android and search engine ecosystems.