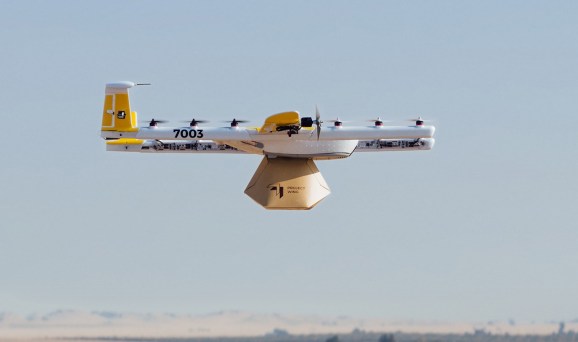 Alphabet X Labs graduate Wing announced late last year that it would soon begin piloting autonomous deliveries in Helsinki, Finland, and a blog post this morning outlined a detailed roadmap. Wing says in the coming weeks it will deploy a small fleet of drones in the city’s Vuosaari district, where they’ll ferry provisions from convenience stores to homes and “multi-family housing communities.”

Wing will launch with two retail partners — gourmet supermarket Herkku Food Market and restaurant Cafe Monami — to deliver items weighing 3.3 pounds or less up to a distance of 6.2 miles. The company says that in anticipation of the launch it has hosted several community events “so that local residents could ask questions about [the] service” and “provide thoughts on how Wing might fit into their lives.”

“Vuosaari is an inspiring locale for Wing in several ways,” wrote the company. “Helsinki’s most populous district, it is bordered by water on three sides, with significant forestland alongside residential areas and a large international cargo port. The density of Vuosaari’s population makes it a great place to launch our first service to multi-family housing communities as well.”

The Helsinki expansion marks Wing’s first European rollout and comes a month after its commercial drone delivery service launched in Australia. Wing currently serves around 100 homes in the suburbs of Crace, Franklin, and Palmerston, where Wing’s drones have completed 70,000 flights and 3,000 deliveries.

Meanwhile, Wing in April gained a small-sized air carrier designation from the U.S. Federal Aviation Administration that will enable it to kick off drone deliveries from local merchants in the Virginia towns of Blacksburg and Christiansburg within months.

Current-gen Wing drones can fly at speeds of up to 78 miles per hour and take off and land vertically, thanks to a dozen vertical rotors and two propellers. Automated flight-planning software determines their route, while a downward-facing camera and other onboard sensors help them avoid obstacles.

In September 2016, the company partnered with fast-casual chain Chipotle in the U.S. to deliver orders for a small group of Virginia Tech students. But only a month later, Wing canceled a tentative collaboration with Starbucks over disagreements regarding the handling of customer data, according to Bloomberg.

Despite the setbacks, Wing is forging ahead against rivals like Amazon, which launched a trial of its Prime Air drone delivery service for select customers in Cambridge, England in December 2016. In the intervening years, companies like Microsoft and startup Flytrex have trialed airborne delivery services in cities like Holly Springs, North Carolina and Wichita, Kansas. In May, Uber announced plans to deliver food by drone in San Diego, and FedEx plans to develop a drone-powered aircraft inspection program in Tennessee. More recently, Matternet teamed up with UPS to launch an aerial delivery service from WakeMed’s flagship hospital and campus in Raleigh.