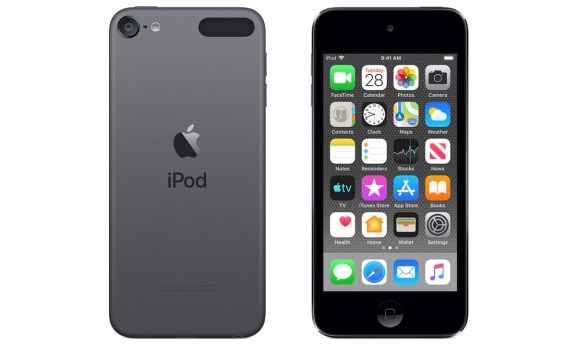 Apple cemented the iPod’s status as a relic by discontinuing all but one model, and then hid the sole survivor — iPod touch — in its stores. Yet the company has decided to keep the inexpensive media player alive with today’s release of the seventh-generation iPod touch.

The new iPod touch is substantially similar to the fifth- and sixth-generation iPod touch models released in 2012 and 2015. It continues to have a colorful aluminum shell with a glass face and include basic 1.2-megapixel front- and 8-megapixel rear-facing cameras, but it has been upgraded with an A10 Fusion processor to enable augmented reality support, plus the option of 32GB ($199), 128GB ($299), and 256GB ($399) models.

Unfortunately, the latest iPod still lacks the Touch ID and Face ID security hardware found on iPads and iPhones, as well as the features — such as Apple Pay — that depend on them. It also keeps the same antiquated 4-inch screen and is stuck with an outdated Bluetooth 4.1 chip.

Apple hasn’t actively marketed iPods in years, but the iPod touch has served since 2007 as “training wheels for the iPhone” — a more affordable option with comparable storage but lower-end components and no cellular capabilities. After Apple discontinued the iPod shuffle and iPod nano in 2017, the nearly four-year-old iPod touch became the company’s only pocketable iPhone alternative, offering kids and budget-conscious adults a Wi-Fi-only computer capable of playing games, music, and videos, as well as running apps.

Apple has worked to maintain both price and feature gaps between the iPod, iPad, and iPhone lineups, preventing $199-$299 iPods from cannibalizing the sales of more expensive products. Historically, Apple has kept iPod touch components one to four generations behind iPad and iPhone flagships, such that the sixth-generation iPod touch shipped with a plastic home button and A8 processor, while iPads and iPhones received Touch ID, Face ID, and multiple CPU/GPU upgrades.

Despite heavily advertising its company-wide focus on user privacy and security, Apple apparently doesn’t feel that the iPod touch needs its latest or even second-latest biometric protections. As such, even though iPhones and iPads have evolved from fingerprint to facial scanners, the iPod is stuck without either — arguably fine for a media and gaming device. It does offer some support, however, for Apple’s pass-focused Wallet app.

Apple similarly bumped the iPod’s processor up to a level below its top performers. The new device gets September 2016’s A10 Fusion processor, which is the same as the chip inside the entry-level iPad, but two to three steps behind the latest A12 and A12X Bionic chips inside the iPad mini, iPad Air, and iPad Pro models, which start at $399.

Six color options — silver, space gray, gold, blue, red, and pink — are seemingly unchanged from the last iPod touch. Unlike the latest iPhones, it continues to include a 3.5mm headphone port so music lovers can keep using their older wired headphones, though wireless headphones such as AirPods are supported.

You can order the new iPod from Apple’s online store today. It will be in stores and shipping to customers by the end of this week.