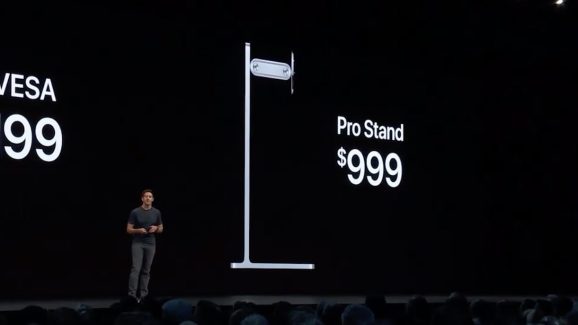 If you’ve followed Apple for a while, you probably know that the company has spent decades evolving from a personal computer maker to a luxury retailer that outpaces diamond vendor Tiffany & Co. in revenues per square foot. But what might superficially seem like a linear progression from selling $666 motherboards out of a garage to hawking $17,000 gold watches in shopping malls has actually been a much less orderly transition — and one that at times has gone in completely different directions.

Consider, for a moment, Apple’s January 2005 introduction of the $99 iPod shuffle, which helped Apple win millions of new budget-conscious customers, and its September 2010 release of the fourth iPod shuffle — a complete music player for $49. Only months earlier, it had introduced the 27″ LED Cinema Display for $999, describing it as a “perfect fit with our powerful new Mac Pro.” By July 2011, it released the improved Thunderbolt Display at the same price.

But if there was any question that Tim Cook’s Apple isn’t looking to save its customers money, it’s been answered by this week’s tone-deaf announcement of a $999 “Pro Stand” accessory for its latest professional monitor, which, as none of its customers would have guessed beforehand, ships without a stand. As a particularly brilliant tweet noted, the Thunderbolt Display somehow was a full best-of-class LED monitor for $999, while what Apple offers now for the same price is just the stand.

Apple didn’t just get to this point on Monday. The past five years saw the introduction of gold Apple Watches and trash can-shaped Mac Pros that were seemingly made without worrying whether actual customers would purchase them. More recently, Apple has pushed up the entry prices for its flagship and near-flagship iPhones, Apple Watches, iPads, and Macs while killing off inexpensive models. If one wanted to read a message into this, it would be that Apple doesn’t want the $49 iPod shuffle, $149 iPod nano, or $299 iPad mini customers any more, at least unless they’re willing to cough up some more cash for newer models.

The complex reality is that Apple has been selling a mix of high- and low-priced products for years, historically with a greater mix of high-priced ones, but appeared to be on a trajectory to democratizing its hardware until Steve Jobs’ untimely death in 2011. Since then, however, the company has tried to simultaneously expand its footprint and satisfy Wall Street, creating an identity crisis that seems to plague every new product announcement. Is a new iPad or Mac going to be priced so that students and school districts can afford it, or is Apple going to need to give away hardware to disadvantaged schools to demonstrate that it still cares about education?

In my view, the main issue is that Apple — now run by a core team of executives who make millions of dollars each year — has become insensitive to the fact that its products are commonly purchased by people who view $159 AirPods as luxuries. Based on comments in the last two quarterly conference calls, these executives apparently learned only recently that they needed to offer multi-year financing plans and device trade-in programs to help customers buy even $749 phones, say nothing of $999 models. My take is that the people complaining about $999 Pro Stands aren’t primarily the (very narrow) target audience for $4,999 Pro Displays, but the millions of customers who could never afford them, and find the very idea of selling such things ridiculous.

While I wouldn’t begrudge Apple the opportunity to keep making “supercar” style Macs or peripherals that go alongside them, the company’s pursuit of crazy expensive projects isn’t just overshadowing its more affordable ones — it’s pushing the company to move further away from the customers it embraced as it began its steepest period of growth in its history, For that reason, Apple seriously needs to reconsider whether it wants to retreat back to making niche tools for wealthy customers, or move back into democratizing technology “for the rest of us,” as it famously said in its early, optimistic Macintosh commercials.

It wouldn’t hurt to invite a few actual (but tight-lipped) customers to sit in on keynote prep, either, to provide notes ahead of the formal announcements. If Apple’s executives are too far removed from consumer sentiment to realize that a $999 phone might cause gasps in China, or a $999 stand might generate groans in America, there are plenty of people out there who would be more than happy to set them straight before they make another unnecessarily embarrassing mistake.