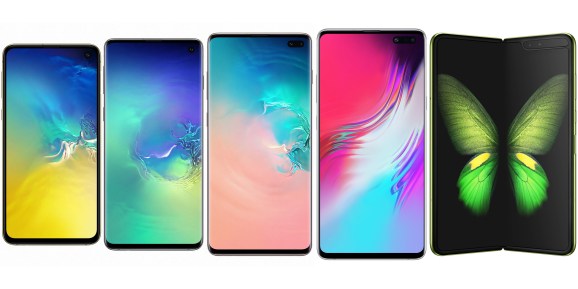 AT&T has some bad news for serious Samsung fans: The carrier’s preorders for the troubled Galaxy Fold have been cancelled, and though Samsung’s flagship Galaxy S10 5G will be available next week, AT&T will sell it only to businesses. In other words, average people will need to find another carrier — such as Verizon — to experience Samsung’s latest innovations.

The Galaxy Fold announcement isn’t especially surprising, but it provides the latest signal that Samsung still doesn’t know when its bleeding-edge foldable phone will be available. To comply with laws regarding delivery of preordered products, Samsung said on May 7 that it would cancel all advance Fold orders unless customers opted in for a post-May 31 delivery date. On May 24, Best Buy cancelled its preorders for the nearly $2,000 device, as well.

AT&T’s decision to follow suit suggests that it still hasn’t received updated release information from the manufacturer, despite rumors that Samsung was only days away from rescheduling the device’s launch. While AT&T isn’t at fault for the product’s delay, it was the only carrier to suggest a new mid-June ship date for the device soon after Samsung said it needed to retool the Fold over display-related issues. As Tom’s Guide notes, the carrier is offering $100 promotional credits to those who had preorders cancelled and is promising to quickly release fund holds and make refunds where necessary.

Separately, AT&T announced late yesterday that it will commence sales of the Galaxy S10 5G on June 17, a month after Verizon launched the same phone on its mobile 5G network.

Unfortunately, in keeping with AT&T’s recent suggestion that it has decided to focus its initial 5G rollout exclusively on businesses — rather than consumers “walking in the street trying to find a network” — the carrier says it will only make the device available to businesses and developers.

According to AT&T, the S10 5G will be able to achieve 5G speeds solely on the carrier’s millimeter wave 5G+ network, which is available only in “very limited parts of 19 cities, with plans to reach parts of at least 30 cities” — a disclosure that suggests regular users wouldn’t be satisfied with the coverage. Moreover, AT&T says it is capping its 5G+ speeds at 2Gbps and doesn’t guarantee that devices will reach 2Gbps “even in areas where [a] 5G+ network is available.”

In South Korea, Samsung has been selling the Galaxy S10 5G for nearly two and a half months, and it is believed to be the most popular 5G smartphone. Over 1 million subscribers are now using mobile 5G devices in that country, versus AT&T’s 5G service, which six months after its launch still has not commenced device sales to regular customers.

The carrier is initially offering a 256GB version of the S10 5G for $1,000, with a Business Unlimited Preferred data plan that includes 20GB of tethering for $90 per month — if a $10 Autopay credit applies. Additionally, developers who attend the company’s AT&T Shape event on June 22 and 23 will receive the phone “at no cost through the end of the year” to incentivize creation of innovative 5G applications.