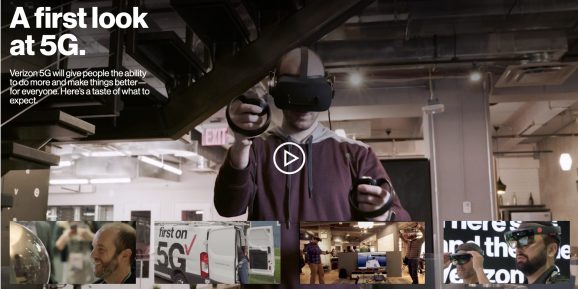 My hat’s off to Verizon this morning for the bold marketing campaign behind Samsung’s Galaxy S10 5G, and more generally, its nascent 5G network. Take a moment to visit the company’s 5G mini-site today, which happens to be the S10 5G’s U.S. launch day, and you’ll experience a wonderfully clean graphic design that works as well on a smartphone screen as on the side of a building, tons of inspirational 5G content, and discounts so aggressive you might want to sign up for service on the spot.

There’s only one problem. As of today, Verizon’s mobile 5G network remains so tiny that over 99% of U.S. residents won’t be able to use the new phone’s signature feature, 5G, where they live and work. The carrier has promised 20 additional 5G cities this year, but none went online in time for the S10 5G’s launch.

For now, anyone who signs up for Verizon mobile 5G service will only be able to use in two cities — Chicago and Minneapolis — and small parts of those cities, at that. This means that for all the hype, including Verizon’s 5G stage time at Samsung’s Galaxy Unpacked event in February, this phone isn’t even being marketed to the country’s most well-heeled “1%” — at least, as measured by population. Without 5G network coverage in other major metros, Verizon is effectively pitching this device to fewer than 1% of U.S. residents, notably in two locations that historically haven’t been hot spots for early adopters.

Verizon’s strategy seems odd because it is odd. In South Korea, Samsung launched the Galaxy S10 5G across three different carriers, each with coverage in Seoul — home to nearly 20% of the country’s population. One of the carriers, LG Uplus, is already offering 5G service to millions of additional customers across multiple additional cities. The Korean carriers have collectively signed up 400,000 customers in the first month of 5G availability.

It’s entirely possible that Samsung has been pushing to get the S10 5G into shops before most countries’ 5G networks can support it. Yesterday, the Galaxy device maker announced that it and two carriers will start selling the phone in the U.K. on June 7, which would be great — except the carriers don’t appear ready to offer 5G service yet. Just this week, Vodafone said it will commence 5G service across seven U.K. cities on July 3, while rival EE still hasn’t set a date for its 5G launch. Thanks to Samsung’s announcement, there’s now some suspicion that EE may open its 5G network earlier than Vodafone, albeit in fewer cities.

Should you be in Chicago or Minneapolis and decide to check out the Galaxy S10 5G for yourself today, you’ll possibly see faster 5G speeds — highly dependent on the neighborhood you’re in — and likely notice the phone’s slightly larger screen and additional rear camera compared with the Galaxy S10+. Since Verizon’s currently offering the phone at a steep discount for new customers and including 5G service for “free” with one of its already-expensive unlimited plans, you wouldn’t be crazy to consider buying the phone, even though more capable Samsung 5G devices are coming later this year.

If you do get the S10 5G today, let me know on Twitter. I’d be interested to hear what your real-world experiences are like with Verizon’s 5G service and the phone — soon enough, there will be dozens of additional U.S. cities with similar coverage, and the over 99% of people outside of Chicago and Minneapolis will benefit from your early insights into this important new technology.