Though several of the world’s earliest next-generation cellular carriers have revealed their peak 5G network speeds, others have relied on vague promises of “blazing fast” performance to set customer expectations. Today, crowdsourced network coverage service Opensignal is actually quantifying early 5G service performance in the first country with “widespread 5G adoption” — South Korea — and the numbers are interesting, as much for where they’re strong as where they’re surprisingly weak.

This doesn’t mean that 5G speeds are only 111.8Mbps, but rather that the 5G service being offered to users on a somewhat spotty basis is delivering that speed on average across all cell towers. While 5G phones can take advantage of faster 5G cell towers when they’re available, they otherwise fall back to 4G, bringing down their numbers.

Though there are valid reasons to question the data’s validity, such as the fact that it was collected starting in the rocky initial days of South Korea’s 5G launch in April through June 12, the upshot is that 5G services are already offering average download performance nearly 50% faster than late-stage 4G, and over 2.3 times faster than standard 4G. Moreover, as Opensignal saw peak download speeds of 988Mbps, there’s plenty of room for more impressive performance as the 5G network sites continue to expand, making 5G more commonly available.

And that’s just in South Korea. As the study notes, U.S. Opensignal users have experienced real-world 5G peaks of 1.2Gbps, over 10 times faster than the South Korean average. AT&T has even claimed to have hit a 2Gbps peak, though its 5G network remains “very limited” in size and unavailable to average consumers. 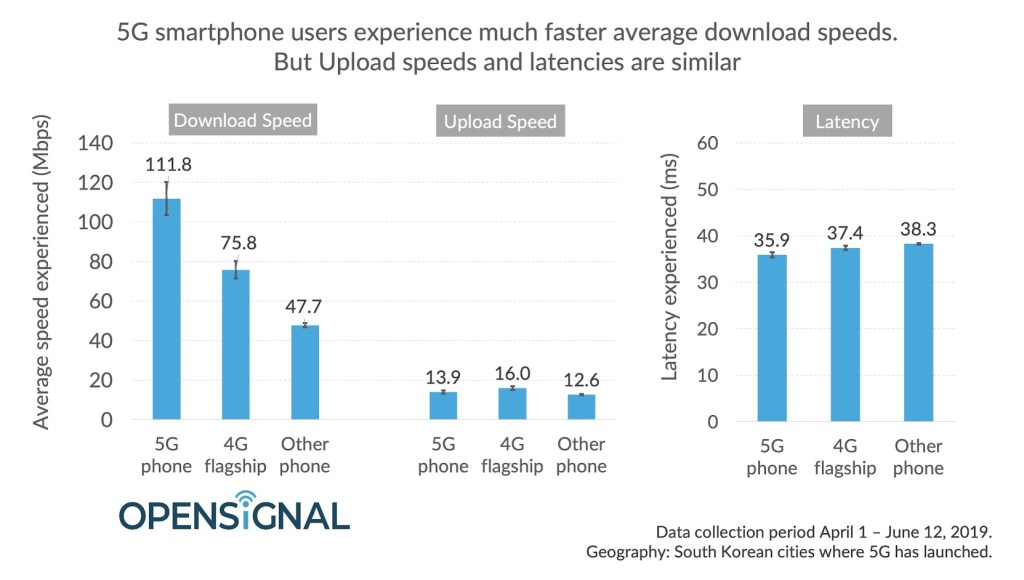 Unfortunately, not all of the news was positive. In South Korea, Opensignal also saw average 5G upload speeds of only 13.9Mbps, down from 16Mbps on 4G flagships, and only a little better than the 12.6Mbps average for “other phones.” Similarly, the latency was 35.9 milliseconds (ms) for 5G, 37.4ms for flagship 4G phones, and 38.3ms for other phones. These numbers are statistically too close to suggest any meaningful differences between 4G and 5G performance.

While Opensignal isn’t surprised by the upload and latency similarities, as “initial 5G technology does not yet seek to improve either characteristic,” it’s worth noting that 5G has broadly promised to radically reduce latency — down to roughly 1ms under optimal conditions — with upload speeds set to see gains measured in multiples of current performance. Improvements to both could come as carriers shift from the initial “non-standalone” 5G standard reliant on 4G infrastructure to pure 5G “standalone” technology, which is just beginning to get underway.

Performance and coverage improvements are expected to arrive steadily over the next 18 months. Many carriers around the world have pledged to have substantial if not nationwide 5G networks in service during 2020, with initial buildouts in major cities expanding throughout 2019.