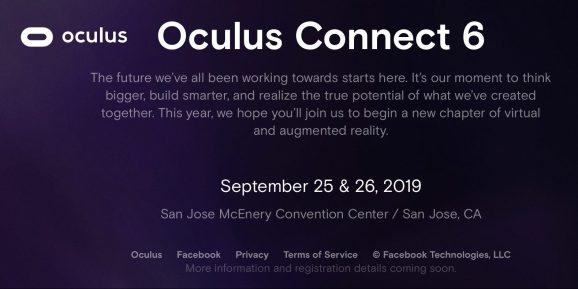 Oculus has firmly established itself as one of the VR industry’s most visionary companies, and its annual Connect conferences are typically one of two times each year when its biggest new initiatives are revealed. Today, the Facebook subsidiary announced that Oculus Connect 6 will be held on September 25 and 26 in San Jose, and it’s hinting at something big — maybe.

The event will take place at San Jose’s McEnery Convention Center, almost certainly opening with a keynote on day one — and if history is any guide, following up with a technical keynote on day two. Oculus says that it’s inviting developers to “join us to begin a new chapter of virtual and augmented reality,” which sounds pretty exciting and could signal anything from a major new hardware reveal to some substantial new software or services.

It could also be little more than a pep talk to developers. Alongside the “new chapter” message, the company also notes that Connect is “our moment to think bigger, build smarter, and realize the true potential of what we’ve created together.” In other words, with Oculus Quest and Rift S now in the marketplace, and no major update to Oculus Go likely to hit this year, the company could spend Connect 6 showing off improved developer tools, a rival to Viveport Infinity, or a bigger connective hub for Oculus experiences. The reference to “augmented reality” might also signal an AR mode for Quest, which has previously been teased.

Oculus has already revealed prototypes of post-Rift S headsets with significantly more impressive capabilities, including a version called Half-Dome with moving varifocal screens and a wide 140-degree field of view. In the wake of Rift S’s recent launch, executives have recently suggested that a considerable upgrade in hardware features — potentially including eye tracking and inside-out tracking — would be necessary to justify a true Rift 2. Given Rift S’s sales trajectory, it’s unclear whether the company would announce a Rift 2 just ahead of Christmas before releasing it next spring.

The company promises that registration details and more information on Connect 6 are coming soon. Updates will be available on the official Connect website.

Update at 7:05 a.m. Pacific: In addition to confirming the date and thrust of the event, a new blog post from Oculus notes that one of the announcements will be new information on a “AAA first-person VR combat experience” developed by Respawn Entertainment, originally announced at Oculus Connect 4. Though Respawn is perhaps best known for its work on Titanfall and Star Wars Jedi: Fallen Order, it has said that the new title is unconnected to those franchises; an early tease video suggested that it will use VR to provide a realistic warfare experience similar to Call of Duty.