A Dutch company has debuted a solar electric vehicle (EV) that can travel 725 kilometers (450 miles) on a single charge. The Lightyear One, a prototype developed by a team emanating from Eindhoven University of Technology, was officially unveiled today at an event in Katwijk, Southern Netherlands.

Lightyear, the company behind the vehicle, was founded in 2016 as an off-shoot of Solar Team Eindhoven, which has won a number of solar-powered car races with what is considered the world’s first family car powered by solar energy. The next step is to bring a road-ready solar vehicle to the consumer realm, which is what the Lightyear One is all about.

The Lightyear One can accommodate five adults, with luggage space of 780 liters. From the five square meters of solar panels alone — which are mounted on the roof and hood — it charges at a rate of roughly 12 kilometers per hour. That isn’t enough to wow the average driver, but it’s worth noting that the vehicle can also be juiced through the usual EV charging stations, including 60 kW (fast-charging), which will get the car up to 507 kilometers range in an hour. It can also charge at up to 400 kilometers overnight from standard domestic 230V sockets.

The solar panels can charge the car while it is stationary, but they also “boost” power while on the move. During a four-hour drive, the Lightyear One should accumulate nearly 50 kilometers’ worth of extra juice, and if the driver pulls over for lunch the vehicle will, of course, continue charging. 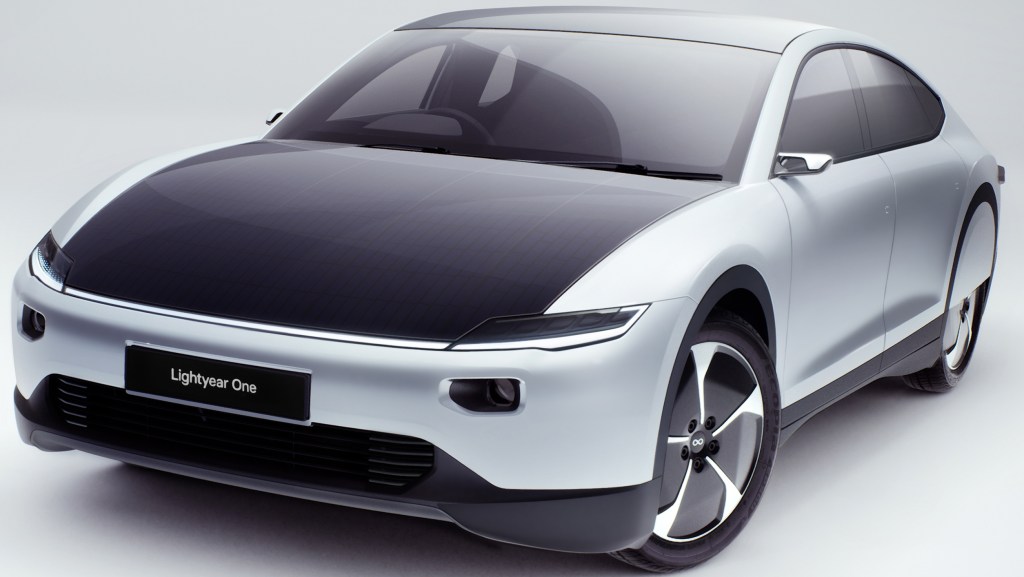 Above: Lightyear One: Solar-assisted car

The exact range and mileage derived from solar power will vary depending on numerous factors, such as climate and driving frequency, but the company estimates that someone driving the national average of 20,000 kilometers/year “in the cloudy Netherlands” would get around 40% of their mileage from solar annually.

The big challenge in developing solar-powered cars is the amount of energy required to power a vehicle that may weigh two tons or more. With limited surface space available for solar panels on cars, Lightyear has worked to optimize the car’s weight and structure, using aluminum and carbon fiber materials, while fine-tuning the aerodynamics to reduce drag — all with an eye to lowering energy consumption.

“Our job at the aerodynamics team is to ensure that the air will move along the curves of the car as smoothly as possible,” explained Annemiek Koers, an aerodynamics engineer at Lightyear. “Because we stop the air from moving in swirls, into holes, or into interstices, we reduce friction between the car and the air. We want the car to cut through the air just like a raindrop — the ultimate example of an aerodynamic object.”

At that price point, the Lightyear One will be a mere pipe dream for most people, but the company said the cost reflects the novelty of the technology — so future iterations should bring the price tag down.

“Since new technology has a high unit cost, we have to start in an exclusive market,” Lightyear CEO and cofounder Lex Hoefsloot added. “Lightyear One is the first long-range solar car and has staggering specifications. The next models we plan to develop will have a significantly lower purchase price. In addition, future models will be provided to autonomous and shared car fleets, so the purchase price can be divided amongst a large group of users.”

The EV market is modest compared to petrol and diesel, but it is growing. According to Bloomberg NEF, cumulative EV sales hit the 4 million mark last year. With over a billion cars globally, that may not seem like much, but looking at the broader numbers reveals a promising trajectory. Indeed, it took around five years to sell the first million electric cars and just a year and a half to shift the second million. After the 3 million milestone, it took only six months to pass 4 million electric vehicles sold.

Investment are plowing a significant amount into EV charging infrastructure, with fossil fuel giants such as BP and Shell acquiring charging network providers. And there are efforts to develop infrastructure for charging vehicles as they move — Sweden, for example, is developing “electrified roads.”

With a range of up to 450 miles, Lightyear hopes to accelerate the uptake of EVs globally — with solar energy as the draw — by alleviating one of the core sticking points for many would-be EV converts.

“The main goal of the car is to fill in where electric cars fall short,” Hoefsloot added. “Research has shown that range and the lack of charging options are still the top concerns that people have when considering electric cars. With Lightyear One, we want to show that our technology enabled us to build one of the most sustainable cars on the market, that also offers great convenience.”