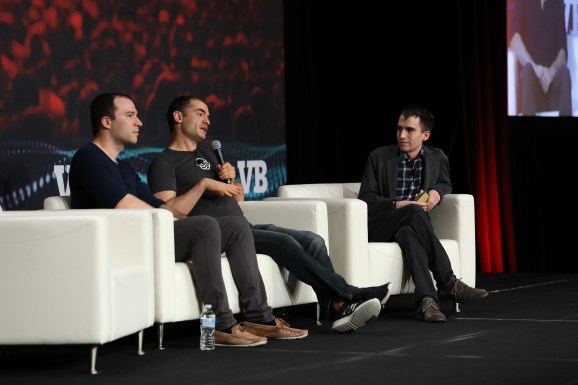 Microsoft today announced that it would invest $1 billion in OpenAI, the San Francisco-based AI research firm cofounded by CTO Greg Brockman, chief scientist Ilya Sutskever, Elon Musk, and others, with backing from luminaries like LinkedIn cofounder Reid Hoffman and former Y Combinator president Sam Altman. In a blog post, Brockman said the investment will support the development of artificial general intelligence (AGI) — AI with the capacity to learn any intellectual task that a human can — with “widely distributed” economic benefits.

To this end, OpenAI intends to partner with Microsoft to jointly develop new AI technologies for the Seattle company’s Azure cloud platform and will enter into an exclusivity agreement with Microsoft to “further extend” large-scale AI capabilities that “deliver on the promise of AGI.” Additionally, OpenAI will license some of its technologies to Microsoft, which will commercialize them and sell them to as-yet-unnamed partners, and OpenAI will train and run AI models on Azure as it works to develop new supercomputing hardware while “adhering to principles on ethics and trust.”

“AI is one of the most transformative technologies of our time and has the potential to help solve many of our world’s most pressing challenges,” said Microsoft CEO Satya Nadella. “By bringing together OpenAI’s breakthrough technology with new Azure AI supercomputing technologies, our ambition is to democratize AI — while always keeping AI safety front and center — so everyone can benefit.”

According to Brockman, the partnership was motivated in part by OpenAI’s continued pursuit of enormous computational power. Its researchers recently released analysis showing that from 2012 to 2018 the amount of compute used in the largest AI training runs grew by more than 300,000 times, with a 3.5-month doubling time, far exceeding the pace of Moore’s Law.

Perhaps exemplifying the trend is OpenAI’s OpenAI Five, an AI system that squared off against professional players of the video game Dota 2 last summer. On Google’s Cloud Platform — in the course of training — it played 180 years’ worth of games every day on 256 Nvidia Tesla P100 graphics cards and 128,000 processor cores, up from 60,000 cores just a few years ago.

“OpenAI is producing a sequence of increasingly powerful AI technologies, which requires a lot of capital,” Brockman said. “The most obvious way to cover costs is to build a product, but that would mean changing our focus.”

OpenAI publishes studies in AI subfields from computer vision to natural language processing (NLP), with the stated mission of safely creating superintelligent software. The startup — which began in 2015 as a nonprofit but later restructured as a capped-profit company under OpenAI LP, an investment vehicle — last year detailed an AI robotics system with human-like dexterity. Its Dota 2 bot defeated 99.4% of players in public matches and a team of professional players twice, and its most sophisticated NLP model can generate convincingly humanlike short stories and Amazon reviews from whole cloth.

Beyond its flashier projects, OpenAI has contributed to open source tools like Gym, a toolkit for testing and comparing reinforcement learning algorithms that learn to achieve goals from trial and error, and Neural MMO, a “massively multi-agent” virtual training ground that plops agents in the middle of an RPG-like world. Other recent public work includes CoinRun, which tests the adaptability of reinforcement learning agents; Spinning Up, a program designed to teach anyone deep learning; Sparse Transformers, which can predict what comes next in lengthy text, image, and audio sequences; and MuseNet, which generates novel four-minute songs with 10 different instruments across a range of genres and styles.

OpenAI is in many ways the stateside counterpart of U.K.-based DeepMind, which Google parent company Alphabet acquired in 2014 for £400 million ($500 million). Since its founding in 2010, DeepMind has — like OpenAI — leaned heavily on computation-heavy techniques to achieve remarkable AI gains in gaming, media synthesis, and medicine.

The advancements haven’t come cheap — Wired reports that in 2017 DeepMind burned through £334 million ($442 million). For its part, OpenAI previously secured a $1 billion endowment from its founding members and investors, and OpenAI LP has so far attracted funds from Hoffman’s charitable foundation and Khosla Ventures. The company spent $11.2 million in 2016, according to its most recently available IRS filing.

Brockman and CEO Altman believe that true AGI will be able to master more fields than any one person, chiefly by identifying complex cross-disciplinary connections that elude human experts. Furthermore, they predict that responsibly deployed AGI — in other words, AGI deployed in “close collaboration” with researchers in relevant fields, like social science — might help solve longstanding challenges in climate change, health care, and education.

“The creation of [AGI] will be the most important technological development in human history, with the potential to shape the trajectory of humanity,” said Altman. “Our mission is to ensure that AGI technology benefits all of humanity, and we’re working with Microsoft to build the supercomputing foundation on which we’ll build AGI. We believe it’s crucial that AGI is deployed safely and securely and that its economic benefits are widely distributed.”

As for Microsoft, it’s yet another notch in an AI toolbelt comprising everything from research grants and solutions suites like Windows Vision Skills to machine learning-powered productivity features in Office 365. On the product side, the company recently rolled out enhancements to Azure Cognitive Services, a prebuilt service designed to expedite no-code AI model creation, and Azure Machine Learning, a cloud-hosted toolset that facilitates the development of predictive models, classifiers, and recommender systems. Additionally, it launched in preview a software kit for robotics and autonomous physical systems development, and it open-sourced a tool that enables developers to imbue AI systems with explainable components.

These updates followed on the heels of high-profile AI collaborations with AT&T, Adobe, and others. Last July, Microsoft said it would team up with Walmart to expedite the retailer’s digital transformation via a combination of AI, cloud, and internet of things (IoT) services, principally by supplying the necessary infrastructure via Azure and applying machine learning services to tasks like routing delivery trucks. Concurrently, the company accelerated its investments in both late-stage and relatively nascent AI startups, contributing to an estimated 72% industry-wide year-over-year uptick in AI and machine learning funding.

In June, Microsoft acquired Berkeley, California-based startup Bonsai, which designs deep learning tools aimed at the enterprise. And in November it purchased XOXCO, maker of the Botkit framework that creates conversational bots for team communications chat apps like Slack and Microsoft Teams, months after snatching up Lobe, creator of a platform for building custom deep learning models using a visual interface.