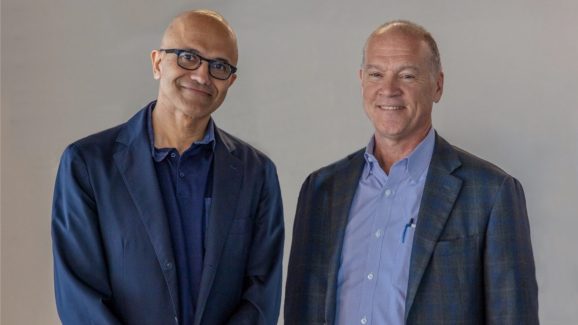 AT&T’s mobile 5G network isn’t actually attracting consumers yet, but businesses are interested in the transformational improvements 5G can bring — and Microsoft is getting out in front of the impending wave of change. The carrier and enterprise-focused software maker announced today that they’re “joining forces to innovate around 5G, AI, cloud, and edge computing,” a development that could have wide-ranging implications for both companies and their customers.

Initially, the deal is about pairing AT&T’s network with Microsoft’s Azure cloud capabilities, with the potential to leverage 5G’s dramatic increases in bandwidth and reductions in latency to deliver faster cloud services. AT&T says that it’s making Microsoft its preferred cloud provider for non-network applications, and will move “most” non-network workloads to the public cloud by 2024, consolidating datacenters in the process. Additionally, AT&T plans to provide “much of its workforce” with Microsoft 365 cloud-based tools.

Microsoft will gain access to AT&T’s 5G network, which will be expanding from millimeter wave-exclusive dots of coverage for business users to nationwide coverage for consumers by the “first half of 2020.” The companies will collaborate to create edge computing solutions, with 5G serving as the enabler of moving processing power from devices and centralized datacenters to the network’s edge.

While today’s announcement is largely focused on the business benefits of the tie-up, the companies suggest that consumers will see “game-changing” benefits in AR, VR, video streaming, and autonomous vehicles thanks to the deal. They’ll also collaborate on public safety and industrial initiatives, including integrated internet of things devices and cybersecurity solutions.

A spokesperson notes that new services based on the collaboration will be announced later this year. The companies have previously worked together on consumer ventures, as well as networking, blockchain, and internet of things offerings for enterprise customers.