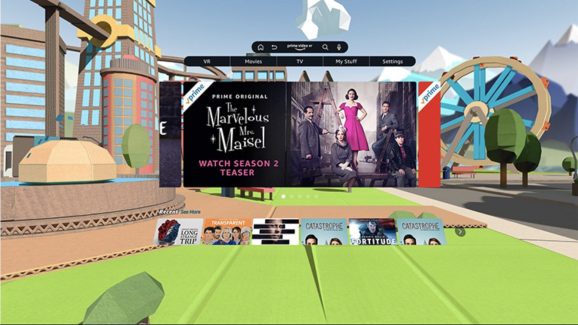 Amazon’s Prime Video service hasn’t become as big of a player in the streaming video market as Netflix, Hulu, or YouTube, but as a spiff for Prime delivery subscribers, it can be fun to explore. Today, Amazon is releasing a new Prime Video VR app to expand the service’s footprint in two ways: It’s launching with a handful of 360-degree videos, and coming to three popular VR headsets.

Using the free app with an active Prime subscription, Oculus Go, Oculus Quest, and Samsung Gear VR users will be able to access the entire library of Prime Video movies and TV shows. The videos will display at the center of a cartoony polygonal interface that looks a lot like Amazon’s Indian shopping mall Prime Day VR stations; Amazon promises subscribers “full access to all their entitled Prime Video and VR content” on these platforms.

On the VR-specific front, Amazon is starting with 10 “handpicked 360-degree videos,” including the Emmy-nominated short Invasion! and Frontline/NOVA’s documentary Greenland Melting. The company says it will continue to add VR-specific content going forward.

Prime Video VR supports Touch controller navigation, as well as voice searching and browsing of content. The app can be downloaded now from the Oculus Quest, Oculus Go, and Gear VR sections of the Oculus Store.