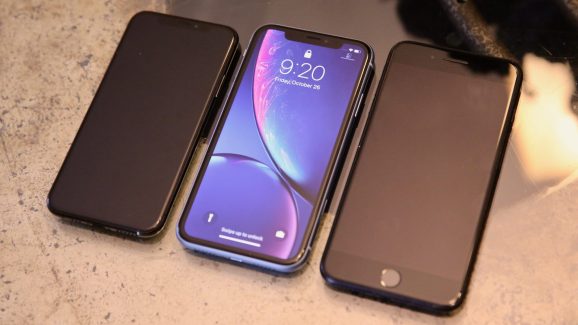 The iPhone XR sits between the iPhone XS (left) and an iPhone 7 Plus (right).

Apple’s upcoming update to the iPhone XS might not be beautiful, but it’s going to pack more significant internal and external improvements than previously expected, Bloomberg reported this morning. Expected to be called the iPhone 11 Pro, the new model is said to feature shatter-resistant glass and improved waterproofing on the outside, as well as major tweaks to both front and rear cameras, and at least two new processors.

According to the report, the major selling point of the Pro models will be the previously feted rear camera system, which will add a third camera and lens pair for ultra-wide-angle captures, and new software to deliver improved photo and video features. On the video front, the iPhone 11 Pro is said to have a live video editing feature that permits reframing, cropping, retouching, and the addition of effects during recording. Overall performance is said to be “closer to professional video cameras,” furthering Apple’s past demonstrations of iOS cameras being used in pro photo and video shoots.

Still photography will also improve. Rather than just snapping a single image, the rear camera is expected to capture three photos at once, using new AI software to merge the images for post-snap recropping. Low-light performance will also reportedly get better, a key issue for Apple following Google’s introduction of Night Sight last year, as will output resolution. In this regard, Bloomberg notably contradicts earlier reports that Apple plans to hold its prior 12-megapixel iPhone camera resolution constant while improving pixel-level performance.

The iPhone 11 Pro’s front camera system will also get boosted with a wider, multi-angle Face ID sensor, enabling the device to properly recognize faces and unlock from angles other than dead on. Apple introduced similar functionality in last year’s iPad Pro, which can unlock when rotated through four different orientations, so it’s unclear whether the iPhone 11 will use an identical or better version of this system.

One other noteworthy but lightly described feature is a new AMX “matrix” coprocessor, which is expected to offload some additional math-heavy tasks from the main processor — possibly augmented reality and computer vision features. Apple has been expected to update the iPhone 11 Pro to a new A13 chip based on second-generation 7-nanometer manufacturing technology, which will deliver performance and power efficiency improvements over last year’s A12 processor.

Most of the report’s other listed iPhone features were already expected, including the addition of a reverse wireless charging feature identical to Samsung’s Galaxy S10 series, matte-finished rear glass, and continued waterproofing, though the report says Apple will enable the Pro to survive “far longer” underwater than the 30-minute guarantee on current iPhones. Apple is once again said to be eliminating 3D Touch in this year’s devices and skipping 5G in favor of next year’s more comprehensively redesigned models.

It’s unclear which of these features will come to the iPhone XR’s sequel, presently thought to be named the “iPhone 11.” The report confirms that this model will at a minimum gain a second rear camera, an A13 processor, and a new green color but doesn’t touch on how many features will be restricted to the “Pro” devices.

Previously rumored updates to the iPad, Apple Watch, and MacBook Pro fall into the “more muted” category. The entry-level iPad is again said to boost screen size from 9.7 to 10.2 inches, while the iPad Pro gets iPhone-like multi-camera upgrades and A13-series processors. Apple is expected to add new case materials to the Watch and introduce an updated MacBook Pro with a 16-inch screen, within the same general footprint as its current 15-inch model. Long-rumored third-generation AirPods and a smaller, two-tweeter HomePod are expected to debut next year.

Collectively, these changes may be enough to entice potential customers to upgrade or buy into Apple’s latest devices despite the looming transition to 5G cellular technology and the continued threat of even higher prices for U.S. customers. Apple noted last year that its users were already waiting longer between iPhone upgrades, a trend it hoped to reverse with aggressive trade-in deals and financing options, though its fall 2019 models will have to justify their status as expensive 4G devices while 5G networks and handsets are becoming available across the globe.