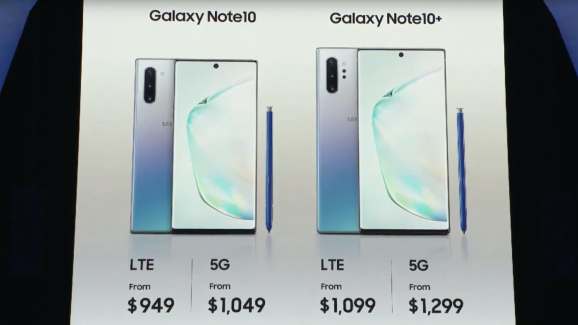 If I lived in a city with a 5G network, I wouldn’t dream of buying a non-5G phone this year. As smartphone prices go up, users are moving to three-year replacement cycles, so buying a 4G phone in late 2019 means getting stuck on the old standard through late 2022 — well past the major carriers’ 2020 commitments for offering national 5G service.

Back in February, Samsung made a weak play for my early 5G smartphone dollars by announcing the Galaxy S10 5G. Now it’s somehow making an even worse pitch with the Galaxy Note10, which is being released in multiple versions that will actually exacerbate the confusion over 5G standards.

Let’s put aside the fact that there are actually two 5G Note10 models — the Note10 5G, and Note10+ 5G — with the former version exclusive to South Korea, and the latter apparently arriving everywhere else. I’ll also look past the fact that Samsung will sell the smaller version for $1,049 versus the large model’s princely $1,299, a price I and the vast majority of customers wouldn’t even consider paying for a phone. This stinks for people outside South Korea, but in the grand scheme of things, it’s more annoying than confusing.

The real confusion begins with Samsung’s decision to release versions of the Galaxy Note10+ that will only support non-millimeter wave 5G networks. Please bear with me for a moment as I try to explain this in the least confusing way possible:

If you’ve been following the carriers’ 5G rollouts, you might have had a hint that something as insane as this was possible — in a worst case scenario. AT&T weirdly began marketing its millimeter wave 5G as “5G+” late last year, and Verizon branded its existing millimeter wave 5G network “5GUWB” (Ultra Wideband) with seemingly no regard for the already cramped status bars on phones. Both options left open the prospect that a less powerful form of 5G might just be badged “5G,” implicitly suggesting that some phones might ship with “5G” but not “5G+” or “5GUWB” support.

The Galaxy Note10+ 5G appears to be the first confirmation that this will happen in the U.S., and it could be bad news for consumers, particularly AT&T’s. At some point, they’ll get to watch as their phone status bars confusingly switch from “4G” to “5GE” (also known as late-stage 4G), “5G,” and “5G+.” But with the Note10+, they’ll apparently lack the necessary hardware to connect to the carrier’s existing 21-city 5G+ network.

T-Mobile customers will have a similar issue. The Uncarrier has launched 5G service in six U.S. cities using millimeter wave towers, which won’t be supported by the Galaxy Note10+ 5G. Instead, the $1,299 phone will connect only to the carrier’s upcoming 600MHz slow but broad 5G network, and apparently the 2.5GHz midband 5G network it expects to acquire from Sprint after their merger closes. Sprint’s version of the phone will likely be the same.

What this means in practice for most people — at least in the United States — is that buying a Galaxy Note10+ 5G will be a horrible investment, at least if you care about being able to access the whole of a carrier’s 5G network next year. Unless something changes between now and the carriers’ release dates, each version of the phone appears unlikely to support the broad multi-spectrum 5G that top carriers have committed to delivering, such that some will fall short in major cities and densely packed events, while others may suffer outside of those areas.

You can decide for yourself whether you’re OK buying a $1,299 phone in late 2019 that is guaranteed to support only part of your carrier’s 5G network. My personal feeling is that Samsung has just given users every reason to hold off for next year’s S11 and Note11 models — or their competitors — instead.