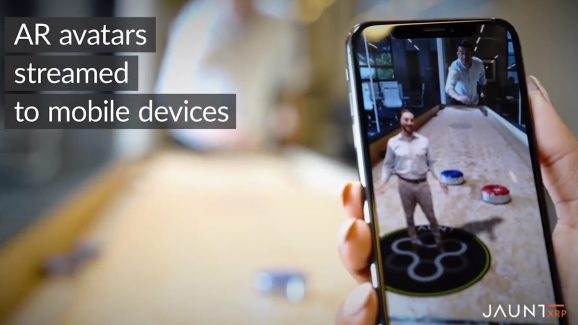 Jaunt's AR avatars can be streamed to mobile devices.

Less than a year after a major restructuring that saw it lay off staff and shift its focus from virtual reality to augmented reality, Jaunt XR announced today that Verizon has acquired its software, technology, and unspecified “other assets” for an undisclosed amount. The deal will give Verizon access to volumetric video capture tools, which Jaunt has described as a good way to demonstrate the value of high-speed 5G networks.

Well publicized for its work in VR cinema, Jaunt began publicly pivoting to AR streaming last fall, showing off 360-degree human capture tools before acquiring volumetric 3D video streaming software Teleporter. We reported in November that the company was seeking to sell off its VR business, and in a surprise move, company founder Arthur van Hoff joined Apple this April.

Over the past year, Jaunt has positioned itself as a leader in the “scalable creation and distribution of volumetric video of humans,” using machine learning to aid in the process of aggregating and distilling multi-camera feeds of people into 3D avatars that can be viewed on multiple devices. The technology could enable believable holographic representations of athletes, celebrities, or other people to appear within AR apps, either for one-on-one interactions or mass simultaneous viewing.

“We are thrilled with Verizon’s acquisition of Jaunt’s technology,” said Jaunt XR CEO Mitzi Reaugh. “The Jaunt team has built leading-edge software and we are excited for its next chapter with Verizon.” The companies expect to briefly work together in a transition for “select portions” of the software and technology.