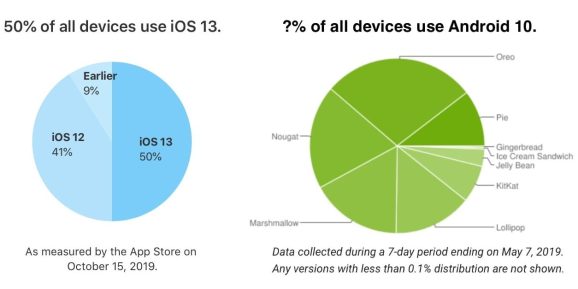 It’s barely news at this point that Apple’s latest version of iOS is off to a strong start with users — just like iOS 10, iOS 11, and iOS 12, it didn’t take long for at least half of all iOS devices to switch to iOS 13. Apple announced late yesterday that 50% of all iOS devices and 55% of all 0- to 4-year-old devices are running the latest major release as of October 15, less than a month after iOS 13’s launch. That said, this year’s numbers are a little cloudy: iPads now run a fork of iOS called iPadOS, which is currently running on 33% of all iPads, versus 41% of newer iPads.

While I could take a deep dive into what each of these numbers suggests, there are only a couple of truly interesting takeaways. First, iOS 13’s quick uptake is tracking roughly with iOS 10’s and 12’s, which is to say faster than iOS 11 but slower than iOS 9, which remarkably hit over 50% of all devices in just one week. Second, the gap between iOS and Android users running the latest major versions of their operating systems has never looked worse for Google.

As of today, Android 10 has been publicly available for a month and a half, but once again, Google still hasn’t updated its developer dashboard with any details on actual user adoption of the major release. Google’s latest chart — posted in May 2019 — shows that the prior version Android 9 (Pie) had as of that point reached only 10.4% adoption after nine full months on the market; it was apparently still under 0.1% several months after release. User installations of the latest Android releases are now so poor that Google’s not even attempting to compare them with iOS.

This might be excusable if the biggest and most successful Android devices were all capable of running the latest major release, but they’re not. Android 10 just launched in a limited beta program for Samsung’s popular Galaxy S10 series, and isn’t expected to hit Galaxy Note 10 phones until December; Galaxy phones older than 9-series models aren’t expected to get Android 10 at all. If you want an official release of Android 10 today, you need to own a Google Pixel phone or certain OnePlus 7 models, with Huawei, Motorola, Nokia, and others possibly shipping updates by the end of 2019.

I say “possibly” because I’ve experienced Motorola’s Android update process first hand, and it sucks. The company explicitly promised Android 9 for a phone I purchased, then abruptly decided not to release the OS update after all. Worse yet, Motorola makes everything about the Android upgrade process into a giant mess — users may have to hunt for carrier-specific updates, wait days for a device to recognize that an update’s available, and use an under-supported Lenovo PC app to perform the installation. Updating is such a nightmare that I can’t believe 10% of consumers even make it to a new Android release; I suspect many users just get new versions when they buy new devices.

Meanwhile, with only rare exceptions, iOS updates go off without a hitch. Within single-digit minutes of initial release, the latest versions of iOS and iPadOS become available to iPhone and iPad users through Settings > General > Software Update, the same place they’ve been for years. They’re available across all supported devices — years worth of them, not just a few models for one or two carriers — at once. If you have Automatic Updates turned on, you’ll most likely have the newest iOS version installed within less than a day of public release. That’s why it only took 77 days for last year’s iOS 12 to reach 70% adoption across all devices, regardless of age, and its predecessor iOS 11 was installed on 85% of supported devices just ahead of iOS 12’s release.

I’m not saying that iOS is perfect; it’s definitely not. This year’s iOS and iPadOS 13 releases shipped with plenty of annoying little bugs that Apple has had to patch with an embarrassingly large number of point-point updates. But at least the bugs are getting addressed, and fairly quickly. Android bugs can persist for months if not years, and there’s a pretty good chance that a given device will just be abandoned after two or three years without even security updates.

I’ve considered switching over to Android a few times over the years, and as I said earlier this week when discussing the advantages of Google and Samsung smartphone cameras, there are some compelling software and hardware reasons to do so. But as a user, I don’t feel comfortable moving from a predictably solid iOS environment to such a fragmented, disjointed platform.

If I was a developer, I’d have no idea how to properly build Android apps at this point. The user base is split across so many Android versions that there’s no realistic way to target apps solely to the latest major release, arguably even the last two or three major releases, without losing the vast majority of users. Meanwhile, iOS developers can move forward with confidence that two-thirds of active devices — and hundreds of millions of people — will be running the latest major release within a couple of months of public rollout.

Google had a fairly compelling Pixel launch event this week, in part because of the promise that Pixel 4 — like its predecessors — will continue to enjoy the earliest access to new Android software. Some of the features, such as the redesigned Google Assistant and Camera app improvements, are legitimately so intriguing that I do indeed see Pixels as hero products to show off Android software.

But with every passing year, access to new Android OS updates has become a less concrete selling point to me, as it’s not quite clear which tentpole features will actually work properly or when they’ll make it to various devices. It’s a mess, and one that Google seriously needs to clean up quickly. Until and unless it gets its act together, the latest Android releases will only benefit a comparatively small number of people, rather than rolling out to the masses of Android users who could — under better-coordinated leadership — be enjoying them on entirely capable devices.