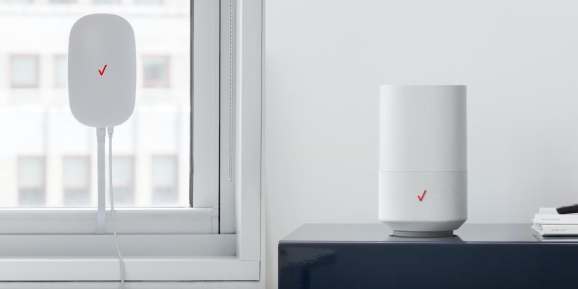 If you live in one of a handful of U.S. cities, Verizon has some exciting news today: It’s now offering customers a true second-generation 5G home broadband router with substantial new features, including integrated Wi-Fi 6 support, Amazon’s Alexa digital assistant, and the ability to self-install without waiting for a Verizon appointment.

As a successor to Verizon’s previously released 1A and 1B models, the “new 5G Home Internet router” goes well beyond its predecessors, which included prior-generation Wi-Fi 5 (802.11ac) support that was fine for devices released prior to 2019. The addition of Wi-Fi 6 (801.11ax) support allows the new router to improve throughput and multi-device handling with 2019 devices, such as Samsung’s Galaxy S10 and Note 10 phones and Apple’s iPhone 11s, which are at the vanguard of the latest Wi-Fi standard.

Verizon alternately describes the router as the “first commercially available tri-band 802.11ax (Wi-Fi 6) router to maximize throughput and coverage in the home” and “the first commercially available Wi-Fi 6 router complete with parental controls.” While there are other Wi-Fi 6 routers on the market, none has integrated 5G functionality, and most of them are not as aesthetically neutral as the Verizon offering.

Though it’s unclear at this point who is making the new 5G router for Verizon, the specs are impressive, and the carrier continues to promise “typical” download speeds of 300Mbps with peaks of 1Gbps — some prior 5G home customers have seen typical speeds 1.5 to 2 times faster than that. There aren’t any specific latency guarantees, beyond that it’s “low latency for a better gaming experience” with “ultra-low lag” during video chats.

Verizon’s router also includes standalone speaker functionality with Amazon Alexa support. The device has a 10-watt speaker inside with the ability to deliver music streamed over Bluetooth or Wi-Fi, and it promises full compatibility with over 100,000 Alexa skills. Combining a router with speaker and assistant functionality makes a lot of sense. Google recently debuted Nest Wifi Routers with those features but dropped the ball on including Wi-Fi 6 functionality.

The self-installation option is another major step forward for Verizon’s 5G Home service. Previously, the company required an installer to visit each customer’s home and make adjustments to the 5G hardware — a step needed to guarantee that millimeter wave 5G signals would be picked up through a window and delivered to the router. Verizon’s new router appears to come with a pleasant-looking window unit that can be mounted without the need for an installer.

As of today, Verizon’s 5G Home service is available solely in “parts of” Chicago, Houston, Indianapolis, Los Angeles, and Sacramento. After one year on the market, the scope of coverage is still believed to be quite limited in each city. The company says it’s still offering the same $50 monthly pricing for existing Verizon wireless customers, and $70 monthly pricing for customers without Verizon phones. Service is free for the first three months, and there’s no additional charge for the new router hardware.