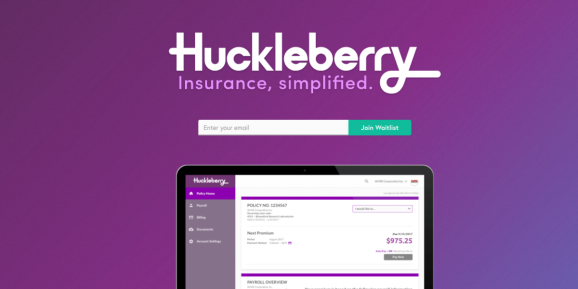 Small businesses are generally unprepared for unforeseen catastrophes, surveys show. A whopping three-fourths of U.S.-based outfits say they don’t have an insurance policy that meets their unique needs, while 40% admit they don’t have coverage of any kind. Of course, the latter are on the hook for incidents like client complaints, contract disputes, and employee injuries, in addition to burglary or theft and customer injury — all of which can amount to hundreds of millions of dollars in repairs and remedial disbursements.

That’s why in 2017 former McKinsey business analyst and Morgan Stanley associate Bryan O’Connell founded Huckleberry, a carrier built on a robust cloud-based software and data science and analytics backend. The San Francisco-based company ambitiously aims to digitize the purchase and management of commercial insurance, a category of coverage that’s notoriously slow to acquire and which historically has been wrapped up in layers of bureaucracy. And it’s achieved a measure of success so far, with investments from Great Oaks Venture Capital, Promus Ventures, and others.

Roughly two years later, today the startup announced that it has raised $18 million in series A funding led by Tribe Capital, with follow-on investments from Amaranthine, Crosslink Capital, and Uncork Capital. It comes after a $4 million seed round in March 2018 and brings the company’s total raised to over $20 million. O’Connell says the funding will accelerate the expansion of Huckleberry’s operations (including engineering, data science, and marketing) and its insurance offerings in personal care, auto repair, restaurants, and other verticals.

Huckleberry — whose policies and claims are issued by Markel Insurance Company, an insurer based in Glen Allen, Virginia — doesn’t charge a broker fee, and it fuses data from public and proprietary sources (such as permits, health code violations, and crime data) to improve the overall assessment accuracy of applicant companies. (Huckleberry notes that it only provides publicly available information to underwriters and that any unused business data is discarded immediately from its servers.) A conversational AI-based chat bot stands in for an agent in the preliminary phases, and machine learning algorithms expedite and verify the underwriting process at each step.

“Huckleberry was born due to the painful process I encountered when purchasing business insurance at a prior startup,” said O’Connell. “Having worked at an insurance carrier, I knew that it was possible to build a platform that eliminates tedious offline paperwork and puts the small business owner first.”

The global insurance market is expected to reach $1.11 billion by 2023, fueled by growth in verticals like health, property, casualty, and life insurance. According to a recent analysis of CB Insights data by XL Innovate, over $1 billion has been invested in commercial insurance startups since 2015, and FinTech Global estimates that deals totaled $2.5 billion in the first three quarters of 2018 — an 89.8% increase year-over-year.