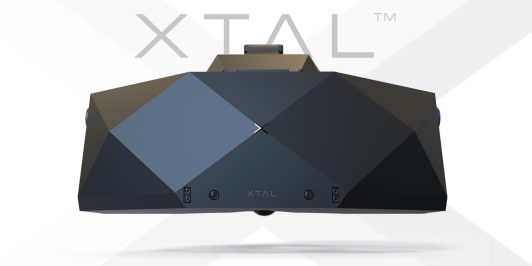 Back in 2018, VRgineers released a large, enterprise-focused VR headset called XTAL with atypically high 5K resolution and a super-wide 170-degree field of view — numbers that were about as good as VR could get at that time. Over the last year, VRgineers upgraded the headset with 180-degree FOV lenses and an optional AR module, and today it’s going further with a next-generation model that improves upon the original in virtually every way.

Critically, connected PCs will now need only a single VirtualLink USB-C cable, rather than six cables, for a full power, display, and data connection. Eye tracking running at 210 frames per second will assist with foveated rendering to keep the pixel processing demands reasonable on current-generation GPUs.

On the control side, the new XTAL will continue to use Leap Motion sensors for “highly accurate” hand tracking. Users of the 8K headset will also benefit from improved 180-degree FOV lenses and the optional AR module, both of which should achieve superior results when paired with the higher-resolution displays.

While VRgineers isn’t the first company to promise an 8K headset, rival Pimax has suffered through over two years of shipping and development problems for its similar solution. Meanwhile, the new XTAL is already in use by the U.S. Department of Defense and some auto manufacturers, and production units are now headed to U.S. Air Force bases for pilot training. The cost of the new model remains ambiguous at this point, but pricing for the original XTAL was $5,800 without the optional AR module.