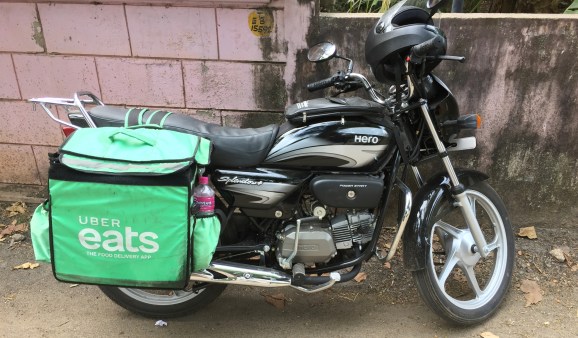 Uber Eats bag on a motorbike in Thrikkannapuram, Kerala, India.

Uber has offloaded its Indian Uber Eats business to local rival Zomato, one month after reports first emerged that the two were engaged in advanced talks. The move is a result of the U.S. company’s failure to gain sufficient traction with food delivery in India.

The all-stock transaction gives Uber a 9.99% stake in Zomato. It also represents part of a wider trend across Uber’s business as it consolidates through divestments and acquisitions.

While Uber continues to cut its losses in the push for profitability, Uber Eats remains the company’s fastest-growing unit overall, with sales up 64% in the past year, thanks to a customer base of well over 90 million active users globally. But Uber faces significant competition, both domestically and abroad. Since its debut in India back in May 2017, Uber Eats has struggled against local players, including well-funded Swiggy and Zomato. Just last week, Gurgaon-based Zomato raised a fresh $150 million from Alibaba’s Ant Financial at a $3 billion valuation.

For Uber, hemorrhaging cash while chasing larger and more established local players makes little sense when it can instead focus on markets where it’s already leading. It’s worth noting that Uber remains one of the top ride-hailing companies in India, and this move lets it concentrate more on the transport side of its business. Moreover, as a future IPO contender, owning an almost 10% stake in Zomato could prove very fruitful in the long run.

“Our Uber Eats team in India has achieved an incredible amount over the last two years, and I couldn’t be prouder of their ingenuity and dedication,” said Uber CEO Dara Khosrowshahi in a statement. “India remains an exceptionally important market to Uber, and we will continue to invest in growing our local rides business, which is already the clear category leader.”

The Zomato transaction is one of several similar deals Uber has pursued in recent years. In the ride-hailing realm, Uber sold its Chinese business to local etaxi giant Didi Chuxing in a $35 billion deal back in 2016. This was followed by a merger with Yandex.taxi in Eastern Europe a year later. Elsewhere, Uber unfurled the white flag on its Southeast Asian adventure in 2018 when it folded its business into Singapore-based rival Grab. But it’s not all about selling — last year Uber confirmed plans to acquire Middle Eastern competitor Careem for $3.1 billion, a deal that closed just a few weeks ago.

From today, Uber Eats in India is effectively no more, and all restaurants, delivery drivers, and Uber Eats customers will be directed to Zomato’s platform.