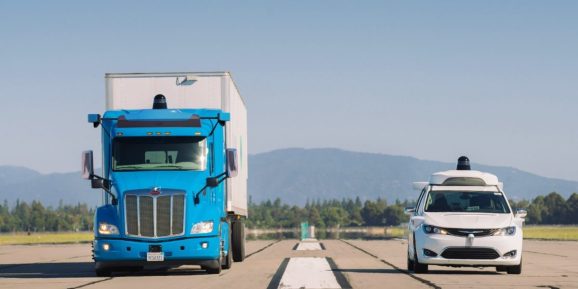 Waymo‘s autonomous vehicles have driven more than 20 million miles, and the Alphabet subsidiary is now expanding its geographic footprint into Texas and New Mexico. In a tweet this morning, Waymo announced it will begin testing self-driving trucks on “promising” commercial routes in the two states as it pursues new transportation solutions. Tests will be primarily along Interstates 10, 20, and 45 and through metropolitan areas like El Paso, Dallas, and Houston.

Chrysler Pacifica vans retrofitted with Waymo’s technology stack will map roads ahead of driverless Peterbilt trucks as part of a project known as Husky. The move comes after the company began mapping the streets of Los Angeles to study congestion and expanded testing to highways in Florida between Orlando, Tampa, Fort Myers, and Miami. It also follows Waymo’s self-driving truck pilots in the San Francisco Bay Area, Michigan, Arizona, Georgia, and on Metro Phoenix freeways (as well as on the I-10 between Phoenix and Tucson).

Demand for driverless trucks is strong. They are predicted to reach 6,700 units globally, totaling $54.23 billion this year, and stand to save the logistics and shipping industry $70 billion annually while boosting productivity by 30%. Besides cost savings, the growth is driven partly by a shortage of human drivers. In 2018, the American Trucking Associates estimated that 50,000 more truckers were needed to meet demand, even after proposed U.S. Transportation Department screenings for sleep apnea were sidelined.

This week, we’ll start driving our Chrysler Pacificas and long-haul trucks in Texas and New Mexico. These are interesting and promising commercial routes, and we’ll be using our vehicles to explore how the Waymo Driver might be able to create new transportation solutions. pic.twitter.com/uDqKDrGR9b

But Waymo has formidable rivals in TuSimple, Thor Trucks, and Pronto.ai, and in Aurora, which attracted a $530 million investment at a valuation over $2 billion in February. There’s also Ike, a self-driving truck startup founded by former Apple, Google, and Uber Advanced Technologies Group engineers that has raised $52 million, and venture-backed Swedish driverless car company Einride. Meanwhile, Paz Eshel and former Uber and Otto engineer Don Burnette recently secured $40 million for their startup, Kodiak Robotics. That’s not to mention Embark — which integrates its driverless systems into semis and launched a pilot with Amazon to haul cargo — or autonomous truck solutions from incumbents like Daimler and Volvo.

Waymo One hasn’t grown far beyond Phoenix geographically, but it’s moving incrementally toward a broader launch in the continental U.S. To this end, a Waymo One app for iOS launched last month in the App Store. Like the app for Android, which launched publicly in April, Waymo One for iOS hails rides from almost any Phoenix-area location 24 hours a day, seven days a week. It prompts customers to specify both pickup and drop-off points before estimating the time to arrival and the cost of the ride. As in a typical ride-hailing app, users can also enter payment information and rate the quality of rides using a five-star scale.

That might be optimistic — Yandex, Tesla, Zoox, Aptiv, May Mobility, Pronto.ai, Aurora, Nuro, and GM’s Cruise Automation are among Waymo’s self-driving car competitors, to name just a few. Daimler last summer obtained a permit from the Chinese government that allows it to test autonomous cars powered by Baidu’s Apollo platform on public roads in China. Beijing-based Pony.ai, which has raised $214 million in venture capital, launched a driverless taxi pilot in Irvine in October. And startup Optimus Ride built out a small autonomous shuttle fleet in New York City, becoming the first to do so.