While most of the world focuses on deploying and improving the performance of early 5G networks, small groups of telecom engineers are working to establish what 6G networks will bring a decade from now. As one of the earliest cellular pioneers, Japanese carrier NTT Docomo today weighed in with predictions on what 6G will look like in 2030, and they’re intriguing: 6G will bring AI everywhere, and transform 5G’s “best effort” performance standards into guarantees of hyper-fast speeds.

Docomo has an expansive view of AI’s role in the 5G and 6G eras, suggesting that AI will empower “cyber-physical fusion” by ingesting real-world data into digital networks, then processing it for human-benefiting outputs such as virtual people, transportation, and manufacturing. Rather than viewing AI as merely a technology to solve specific issues, Docomo equates it to the brain in a human body, with 5G or 6G serving as the nervous system that transmits data between the artificial brain and sensory organs — albeit on a much larger scale. “AI reproduces the real world in cyberspace and emulates it beyond the constraints of the real world,” explains Docomo, and over time, will enable computers to both predict the future and discover new knowledge.

The key to improving AI’s performance will be ultra-low latency, Docomo says, as AI will need to rapidly ingest real-world information and output it into feedback of value to users. Among other applications, Docomo expects that AI will enable communication between humans and things, such as a holographic virtual doctor talking directly with a patient. Reducing network latency from 5G’s sub-5-millisecond hopes and 1-millisecond target below 1 millisecond everywhere will guarantee that such interactions feel seamless to people, no matter where they may be using wireless services.

Docomo isn’t the only organization suggesting that AI will have a major role in the 6G era or forecasting that AI will be pervasive a decade from now. Last June, the IEEE suggested that 6G will give wireless devices access to human brain-level AI capabilities, with the heavy processing taking place on networked servers. As just one example, the IEEE suggested that drones could be remotely piloted by human-caliber AI, and building assembly coordinated by machines located far away from construction sites. 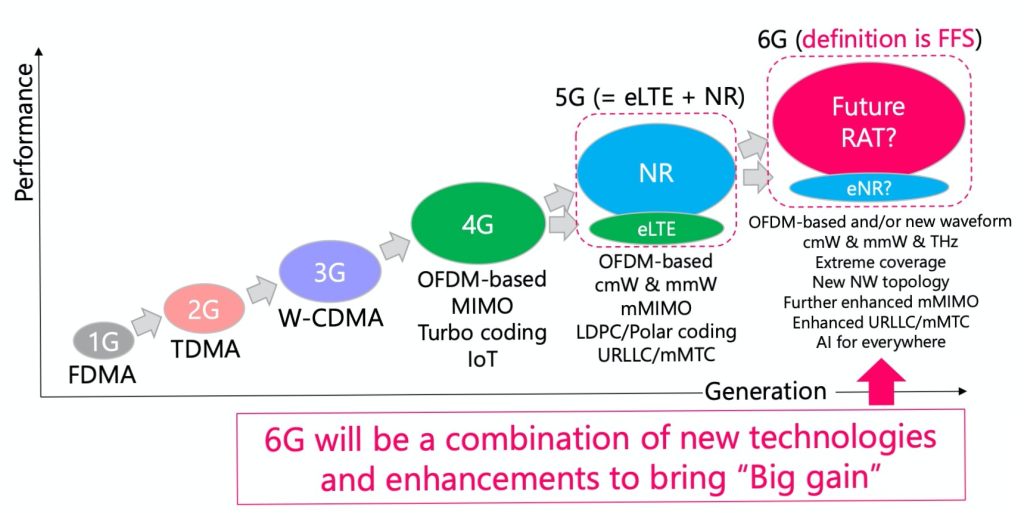 Some of Docomo’s other predictions similarly dovetail with what early 6G researchers elsewhere have suggested, including expansion of frequency support from 5G’s centimeter and millimeter wave frequencies into terahertz spectrum, plus related changes to the way networks are built and augmented with massive MIMO antenna systems. One goal, Docomo suggests, will be to go beyond 5G’s focus on improving download speeds at whatever the network’s best capabilities are at a given point, and deliver guaranteed multi-Gbps performance and ultra low latency for both downloads and uploads.

This change, Docomo suggests, will enable 6G to support not only current 5G use cases such as enhanced mobile broadband for consumers, massive machine communications for industry, and ultra-reliable low latency communications for transportation, but “extreme requirements for specific use cases” that need currently implausible combinations of bandwidth and latency. Moreover, Docomo expects 6G to deliver gigabit coverage everywhere, with peak speeds in excess of 100Gbps, while expanding cellular coverage in the sky, sea, and space. Early 5G is currently delivering sub-gigabit speeds in many places, but with the goal of improvement over time.

One of the carrier’s interesting forecasts is that 6G will include support for radio frequency-based wireless charging, freeing battery-powered devices from the need to be manually charged. While Docomo doesn’t provide much detail on how this will be accomplished, several companies are already working on wireless charging solutions using low-frequency and millimeter wave signals, seemingly without the expectation of incorporating their innovations into future cellular standards.

NTT Docomo’s full set of predictions for 6G are included in this white paper. You can compare and contrast the carrier’s views with those of early 6G researchers in Finland here.