A mobile app that was created to manage voter data so Democrats could close the digital gap with President Trump has instead sown chaos during the Iowa caucuses.

Organizers of the local meetings were supposed to use the app created by startup Shadow to report results from Iowa’s unusual voting system. In the caucuses, people wishing to support a candidate must be physically present at a meeting, where they stand in groups and wait to be counted. Update on February 5: Shadow tweets apology.

To make that process more efficient, the Iowa Democratic Party gave local managers the Shadow app to input results. But results were delayed and backup measures — such as calling a hotline — also failed, according to the New York Times.

Update from @iowademocrats on #iacaucus results:

“This is simply a reporting issue, the app did not go down and this is not a hack or an intrusion. The underlying data and paper trail is sound and will simply take time to further report the results." pic.twitter.com/1kDcZ4HRPu

While the results were still being tabulated, nearly everyone reportedly involved with the creation of Shadow was rapidly distancing themselves from the debacle.

The company’s website provides scant information on the people involved, other than to note that they formerly worked with campaigns for President Obama and Hillary Clinton: 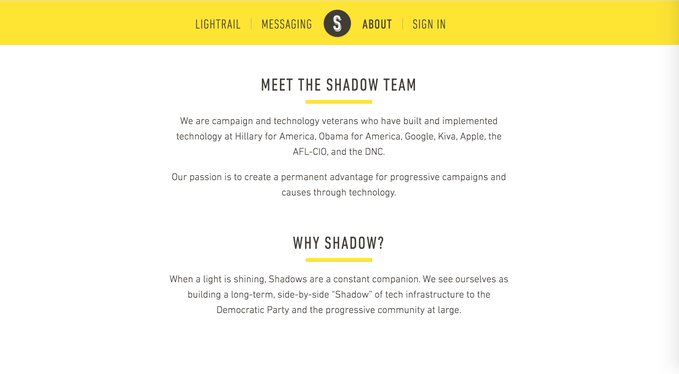 So who is behind Shadow? The answer remains murky.

In the wake of Donald Trump’s shocking 2016 victory, a number of Democratic Party leaders recognized that the party had fallen far behind in terms of digital operations. To fill the gap, a wave of progressive startups launched to offer services and tools to Left-leaning candidates.

One of those is Groundbase, which was founded in 2017 by Gerard Niemira. His Twitter account is currently set to private. According to his LinkedIn profile, Niemira worked for Clinton’s campaign in 2015 and 2016 and was eventually promoted “to lead the small but mighty team in charge of all of the campaign’s tools for field organizers and volunteers.”

The company raised money from Higher Ground Labs, which says it acts as “investors, partners, collaborators, and trainers to ensure the progressive community uses technology to run the best campaigns possible.”

As of today, Higher Ground Labs no longer lists Groundbase among its portfolio companies. But a cached version on Google search can be found from as recently as January 18. 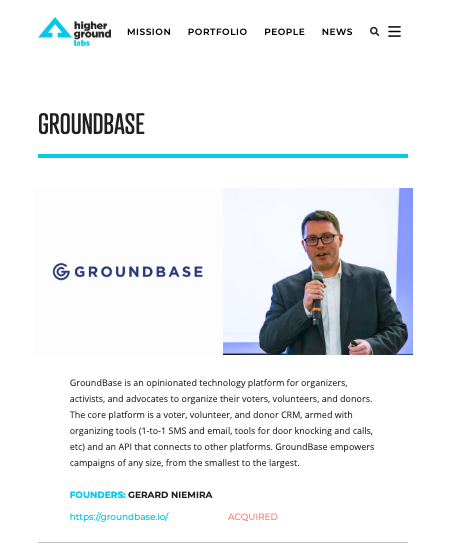 In January 2019, a nonprofit called Acronym announced that it had acquired Groundbase for an undisclosed sum:

I’m so excited to announce @anotheracronym has acquired Groundbase, the best CRM + SMS tool on the political market, along with their incredible team led by @gjniemira + are launching Shadow, a new tech company to build smarter infrastructure for campaigns https://t.co/rGQQCORzvt

Acronym describes itself as a “nonprofit organization committed to building power and digital infrastructure for the progressive movement.” It was founded by Tara McGowan, who served as a digital producer on Obama’s 2012 compaign, according to her LinkedIn profile. According to LinkedIn Niemira also served as CTO of Acronym while also running Groundbase.

On its About page, Acronym says: “In 2018, Acronym and its affiliated political action committee, Pacronym, helped elect 65 progressive candidates across the country with new tech and digital-first strategies to register and turn out voters. In January 2019 we launched Shadow, a tech company focused on enabling organizers to run smarter campaigns. Acronym is also an investor in Courier Newsroom, a digital-first local media company, and Lockwood Strategy, a digital strategy firm.”

But in the wake of the Iowa voting mess, Acronym issued a statement claiming it was merely an investor in Shadow and had little knowledge of it:

MSNBC’s @chrislhayes finally asked @davidplouffe – board member of the centrist PAC behind Shadow Inc – about the app that wrecked #IowaCaucuses. Plouffe offered a few seconds of spin and Hayes moved on. pic.twitter.com/STruSKQh5E

In a blog post introducing Shadow in January 2019, now only visible via the Internet Achive, Niemira wrote: “Acronym is thrilled to announce the launch of Shadow, a new technology company that will exist under the Acronym umbrella and build accessible technological infrastructure and tools to enable campaigns to better harness, integrate, and manage data across the platforms and technologies they all use. As part of the launch of Shadow, Acronym has acquired Groundbase, a peer-to-peer SMS and CRM tool that helped 75 progressive organizations and campaigns win elections during the 2018 cycle.”

The problem facing many Democratic campaigns, according to Niemira, was that they were manually pulling voter data from different organizing services and apps, creating a risk that data is lost or muddled or that campaigns lack a single complete view of each voter.

“Our goal is to develop a data syncing platform that automatically solves ecosystem problems like this one: getting data where it needs to go when it needs to go there, saving organizers hours of work and reducing the risk of mistakes and lost data,” he wrote. “And imagine how much more effective campaigns and organizations would be if they knew not only whether a voter’s door was knocked [on], but whether they [had] received a text message about a local event from their state party or local candidate — or whether they had received a digital ad about that event on their Facebook feed or YouTube channel. Shadow’s goal will be to do just that — and it will aim to give campaigns, state parties, advocacy groups, PACs, and others a way to manage all of this data in one place in a way that users of all levels can act like experts.”

During this election cycle, Niemira described the company’s mission like this: “As part of Shadow’s technology suite, Acronym will continue to license Groundbase technologies to campaigns and organizations across the progressive movement. But by marrying Groundbase with Acronym’s digital communications and advertising expertise, Shadow will also focus on creating the infrastructure that will enable Groundbase technology — as well as all the other technology offerings in the political market — to better integrate across platforms and organizations. And it will be able to layer on top of any data warehouse used by Democratic parties and campaigns.”

From filings with the Federal Elections Commission, Democratic presidential candidates using Shadow include Mayor Pete Buttigieg, former Vice President Joe Biden, and Senator Kirsten Gillibrand (who dropped out last fall). The Texas Democratic Party is also a customer, as is Super PAC For Our Future, which plans to spend $90 million targeting swing states for Democratic candidates.

The hours and days to come will certainly feature forensic attempts to understand just what went wrong, and what role Shadow played. But in the initial aftermath, the Democratic Party’s effort to demonstrate its digital house is in order seems the first big casualty of Monday’s voting misfire.